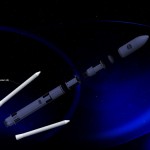 WASHINGTON — NASA has selected six proposals to improve the affordability, reliability and performance of an advanced booster for the Space Launch System (SLS). The awardees will develop engineering demonstrations and risk reduction concepts for SLS, a heavy-lift rocket that will provide an entirely new capability for human exploration beyond low Earth orbit.

“The initial SLS heavy-lift rocket begins with the proven hardware, technology and capabilities we have today and will evolve over time to a more capable launch vehicle through competitive opportunities,” said William Gerstenmaier, associate administrator for the Human Exploration Operations Mission Directorate at NASA Headquarters in Washington. “While the SLS team is making swift progress on the initial configuration and building a solid baseline, we also are looking ahead to enhance and upgrade future configurations of the heavy lift vehicle. We want to build a system that will be upgradable and used for decades.”

Designed to be flexible for launching spacecraft, including NASA’s Orion multipurpose vehicle, for crew and cargo missions SLS will enable NASA to meet the president’s goal of sending humans to an asteroid by 2025 and to Mars in the 2030s. The initial SLS configuration will use two five-segment solid rocket boosters similar to the solid rocket boosters that helped power the space shuttle to orbit. The evolved SLS vehicle will require an advanced booster with significant increase in thrust from any existing U.S. liquid or solid boosters.

Individual awards will vary with a total NASA investment of as much as $200 million.

“We are building a new national capability to carry astronauts and science experiments beyond Earth orbit to new destinations in space,” said Todd May, SLS program manager at NASA’s Marshall Space Flight Center in Huntsville, Ala. “Our industry partners have presented a variety of options for reducing risk while increasing performance and affordability, and we’re looking forward to seeing their innovative ideas come to life.”

The proposal selections are the first step in the NASA Research Announcement procurement process. The second step, the formal contract award, will follow after further negotiations between NASA and selected organizations. All funded efforts will demonstrate and examine advanced booster concepts and hardware demonstrations during a 30-month period. This risk mitigation acquisition precedes the follow-on design, development, testing and evaluation competition for the SLS advanced booster currently planned for 2015.

All proposals will be valid for 12 months to allow for a later award should the opportunity become available, unless withdrawn by the offeror prior to award. Successful offerors to this NRA are not guaranteed an award for any future advanced booster acquisition.

The first test flight of NASA’s Space Launch System, which will feature a configuration for a 77-ton (70-metric-ton) lift capacity, is scheduled for 2017. As SLS evolves, a two-stage launch vehicle configuration will provide a lift capability of 143 tons (130 metric tons).

Click here to go to our other articles on the Space Launch System.