Comments Off on Entertainment 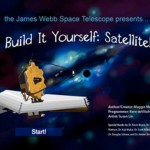 NASAs Build Your Own Satellite Game

Fly the space shuttle and dock with the International Space Station in this Flight Simulator game.