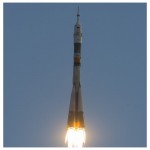 Williams, Malenchenko and Hoshide are scheduled to dock their Soyuz TMA-05M spacecraft to the Rassvet module of the station at 12:52 a.m. EDT Tuesday, July 17. They will join Expedition 32 Commander Gennady Padalka of the Russian Federal Space Agency and Flight Engineers Joe Acaba of NASA and Sergei Revin of Russia, who have been aboard the orbiting laboratory since May 17.

The six crew members will work together for about two months. Acaba, Padalka and Revin are scheduled to return to Earth Sept. 17. Before they depart, Padalka will hand over command of the station and Expedition 33 to Williams. She, Malenchenko and Hoshide will return home in mid-November.