When will USA return man to the moon? Will you see it? 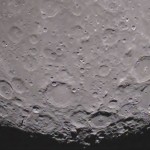 South pole of the far side of the moon as seen from the GRAIL mission’s Ebb spacecraft. Image credit: NASA/JPL-Caltech

Being old enough and lucky enough to have seen two Saturn 5 rockets leave Earth for the moon in my youth, I was wondering would the youth of today ever see the U.S. or even mankind put man on the Moon again.  In looking at that question and taking into account that the average age in the U.S. is 36.8 years old will the majority of people alive today live to see man in the moon again? The reality is that, even with the anemic funding for NASA, the United States is still the closest to putting a man on the moon. China, Japan all have goals but the reality is they are still a long way away having just barely put men in Earth orbit.

That being said where is the U.S. now and is the moon even a goal. A this time there is no actual manned mission to the moon on the books. The Space Launch System or SLS is currently in development as the heavy lift vehicle which in theory could return man to the moon. In addition the Orion crew vehicle is also in development. The current schedule for the SLS has it ready for service in 2030….yes that’s right 2030 eighteen years from now. At a cost of 41 billion dollars we will finally have a rocket with which we can return man to the moon in 2030. The point here is to calculate, based on current progress, when could man return to the moon. When could that happen and will you be alive to see it. If we are realistic and add a slip to the SLS delivery schedule (when is the last time a NASA project of this magnitude stayed on schedule?) of say 5 years that puts us at 2035 before we can even think about returning. In NASA speak this would be the No Earlier Than (NET) date.

We also have to take into account the other logistics and systems needed to support a mission to the moon. This would include the lunar lander, and other components needed to complete the mission. If we add 5 years for this work we come up with a NET date for return to the moon of 2040. That is 28 years from now in 2040. If you are the average American you will therefore be 64.8 years old by the time man returns to the moon.

As disheartening as this is it also means that it will have been 70 years between our visits to the moon. When you think about it like that it really does appear that John Kennedy did pull a decade from the future when he motivated the U.S. to put man on the moon in the 1960s. If we apply the same logic to placing man on Mars then odds of you seeing that in your lifetime look, well, less than good.

The fact of the matter is that it is not rocket fuel that puts man in space, it is not even money as some have said. What puts man in space is desire. If the people of the United States, or even Earth, wanted to return man to space it could happen very quickly. Unfortunately the desire to actually return to space has been replaced with Hollywood movies and video games which give people the illusion that going to space is as easy as building a Hollywood stage.

At some point mankind will again return to space. It is sad to think that it will be almost a century between visits to the moon but that is the current outlook. Why is this, well that is another article. Generations are remembered for what the accomplish. The 1940s had the greatest generation and the Victory of WWII, the 1960s generation had the moon shots, since then we have made technological progress but have not managed to put something into the history books that makes us stand out. How will this generation be remembered…maybe it will not…it is up to us.