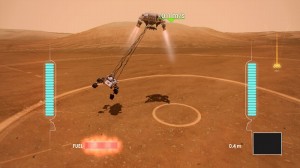 NASA has released a new video game that celebrates the Aug. 5 landing of its rover on Mars.

The “Mars Rover Landing” game is made for the Xbox 360, and uses the systems kinect motion sensor. The game is available for free on the Xbox Live Marketplace.

The game allows players to take control of the spacecraft as it starts to go though the atmosphere of Mars.

“Families can get a taste of the daring that’s involved in this, just landing this mission on the surface,” Doug McCuistion, director of NASA’s Mars Exploration Program, told reporters today. “It’s going to be very similar to the way the team actually is going to do that.”