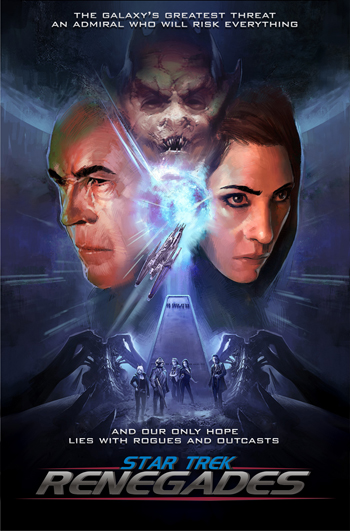 (Rating – 2.5 out if 5 Orbs) Being a Star Trek fan literally for literally all of my life (Okay I was 7 when it started on TV), I was excited to see the release on YouTube of a new feature length fan funded film, I always have high hopes for these types of ventures once I saw the series of fan based new TV shows on YouTube called Star Trek Continues. The fan series absolutely blew me away, with the attention to detail of the sets, the lighting, writing and acting. So this week when a well funded  fan film came out I could not wait to watch it. In this film you will find some actors you are familiar with from various incarnations of the TV shows and Movies. Walter Koenig (Chekov),, Tim Russ (Tuvok), for example and even actors such as Grant Imahara, (From Mythbusters) and Ed Furlong (John Conner in the original Terminator) make appearances. To spite having these and other actors you will recognize, I could not help but be a bit somewhat disappointed by the film.

Being a Kickstarter funded film you need to temper your expectations with respect to the special effects. Some of them were very crude while others were very good. Some of the worst were at the beginning of the film which set some rather low expectations and led to some immediate disappointment. It would have been better if  the effects were better at the beginning to help in the suspension of disbelief that immediately pulled you out of the film. In any case they did improve as the movie went on. Now to the acting.

In Star Trek Continues TV series the acting of Grant Imahara was ..we..not good, he was much improved in this effort. Tuvok was portrayed well and even though Checkov play himself, it was not his best day. There was a fair amount of overacting across the board but that is to be expected. Again you have to appreciate the magic and acting in “actual” movies and this reminds that Hollywood really does produce some magic. The thing about fan based films is that while they may not have the budget or big name actors, the plot is where you should focus. While okay for a fan film the plot also left something to be desired.

There was little character development so I found myself frankly lost and not really caring about the plight of the heroes in the film. The story starts ten years after Voyager’s return from the Delta Quadrant with the Federations main supply of dilithium crystals disappearing. Drastic measures are taken which require Admiral Checkov and Tuvok to put together a renegade crew to find out what is happening to the critical supply of dilithium. The story was a bit wondering and disjointed. The movie had the obligatorily amount of star ships firing photon torpedoes and our heroes in hand to hand combat with alien evil doers. I am not trying to be harsh, it was a fan film after all, but I did have high hopes. This is a good fan if your a real Star Trek fan, and you should give it a watch. If you have not seen the first episode of Star Trek Continues I would definitely recommend you watch it. The writing and acting will have you thinking you found a long lost episode of the original series.

I enjoy the fan films and while not up to Hollywood standards it is among the better attempts you will find out there. Fans of the various movies or TV shows can get their fix for new some new Star Trek adventures.