Images of Planet outside our solar system published. 51 Eridani b 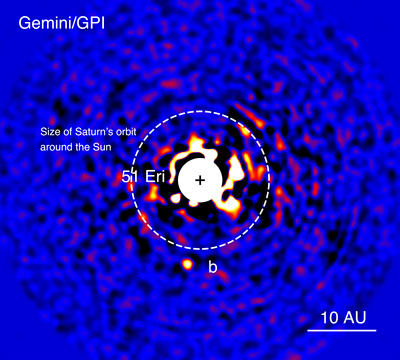 This is an image of the Jupiter-like extrasolar planet 51 Eridani b, taken by the Gemini Planet Imager in near-infrared light on December 18, 2014. The bright central star 51 Eridani is hidden behind a mask in the center of the image to enable the detection of the exoplanet one million times fainter.
Credit: J. Rameau (University of Montreal) and C. Marois (National Research Council of Canada Herzberg)

For years the hopes of actually seeing a planet outside our own solar system have been tied to the James Web Space Telescope. Now we have an early peak at what we will see. A team of astronomers, including half a dozen from the Space Telescope Science Institute (STScI) in Baltimore, Maryland, have used the Gemini Observatory’s new Gemini Planet Imager to find the most solar system-like planet ever directly imaged around another star. This has passed fairly quietly in the main stream media but it is significant none the less. You can argue about the cost of the JWST but the wealth of possibly humanity changing lessons we could find out about our universe is priceless. The planet, known as 51 Eridani b, is about two times the mass of Jupiter and orbits its host star at about 13 times the Earth-sun distance (equivalent to being between Saturn and Uranus in our solar system). The planet is located about 100 light-years away from Earth. The Gemini data provide scientists with the strongest-ever spectroscopic detection of methane in the atmosphere of an extrasolar planet, adding to its similarities to giant planets in our solar system. “This planet looks like a younger, slightly bigger version of Jupiter,” said Dr. Laurent Pueyo of STScI, one of the astronomers who carefully measured the planet’s light against the background glare of starlight. “That we can see so clearly the presence of methane for a planet a million times fainter than its star, even through the atmosphere, bodes very well for the future characterization of even fainter planets from space using the James Webb Space Telescope and the Wide-Field Infrared Survey Telescope.”. In imaging planets we can find the chemicals in their atmosphere. What if for example we find chemicals related to pollution? What could cause that? What if we find a planet that turns green once an orbit around it’s sun? Exciting times to come and this is an early peak at the future.