If you’re an original series Star Trek fan then it has most likely been decades since you have seen a new episode. Long gone are the times when you did not know what the next scene would be, how Kirk or Spock would handle what ever problem they were handed. No, new episodes have not been found in a vault somewhere but what has been found is as close as you can get to that.

There is a group making NEW original series episodes, as close as one can get to going back to the 1960s and picking up where the series left off at the end of season 3. This group is composed of a bunch of very talented entertainment professionals who have joined forces, sharing their passion for Star Trek The Original Series (TOS), and making something incredible. This new series is called Star Trek Continues. 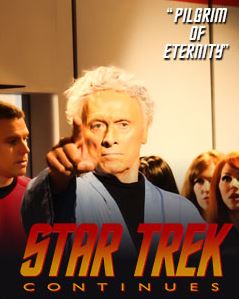 The first episode of TOS “Season 4”

The first Episode entitled “Pilgrim if Eternity”. This story picks up right from where the original story of the Greek God Apollo left off in the second season episode “Who Mourns for Adonais?”. In this production the fan group has gone as far as getting the original lead actor from TOS to reprise his role. The god Apollo is played by Michael Forest who also played this part in the original. After 40 years he has not lost a step as he skillfully plays the part of Apollo once again. Other interesting cast members include the Engineer Scotty. This part is played by the real life son of Scotty,  Chris Doohan. You can definitely see the family resemblance and his and accent voice is spot on. Another interesting actor is Grant Imahara  from the TV show Mythbusters who plays Sulu. He is clearly the least seasoned of the actors to be kind but we can forgive this. Episode 2 stars Lou Ferrigano as the villain. The acting by all of the cast is outstanding, especially that of Apollo. You can definitely tell this is not a bunch of guys who hang out in their basement playing make believe. 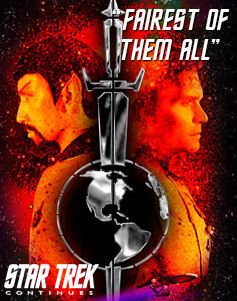 The third Episode picks up on one of my favorite of the original series where the “Good” Enterprise crew are swapped for the “Evil” crew during a transporter accident. It is entitled Fairest of Them All. Once again it seamlessly picks up right where the original left off. In this continued story we see how the Evil Spock deals with the return of his captain after being exposed to the “Good” crew and challenged to make a positive difference in his universe.

The sets are an exact duplicate of TOS made from the original blue prints, right down to the smallest detail. The passion and labor of love really comes out. This shows as you cannot tell this set from the original. The production quality is also outstanding, the lighting effects, camera work, costumes all look exactly like the original. The script could have been pulled right from the 60s series the way the pace and speed of the plot moved worked perfectly. The transition from the first episode was seamless. These guys have nailed it.

This fan film group is crowd funded and has made three complete full length episodes. You can see them on the Star Trek Continues website. I could not help but watch all three as soon as I could. As I did there were times I forgot this was not the original. Having seen all of the TOS episodes many times it was an odd feeling not knowing what was going to happen next.

This is the best, most authentic recreation of the original series you will find. It is on a par with anything Hollywood could produce…and maybe better.I cannot wait for the next NEW Star Trek episodes to roll out at the end of the next crowd funding!