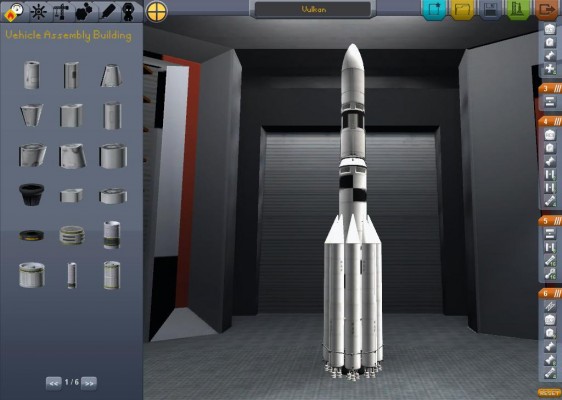 This program is like LEGOs for the kid in all of us. If you have ever wanted to be a rocket scientist here is your chance, The program presents you with many types of engines, fuel tanks, capsules, fins, solid rockets, multiple stages, satellites and more. With the free add on packs the possibilities of what you could build are mind boggling. If you can think of it you can make it.

The program is set on a launch complex on the planet Kerbal…which looks suspiciously like Earth. Kerbal has a Moon which presents the first obvious goal for the newbie rocket builder. There is an entire universe programmed in including other planets, solar systems moons, asteroids etc. Personally I started off just trying to build a rocket that would do a sub-orbital launch and safely return my Kerbal astronaut to the planet. You actually have to fly the rocket and stage it, which is a lot of the fun. Once I figured out how to launch and return I built a rocket that could attain orbit around Kerbal. Having achieved that lofty goal the moon was firmly in my sites. Trying various combinations of solid rockets and liquid engines, multiple stage rockets I finally managed to impact the moon..there was great sadness on planet Kerbal at the loss of the crew. I then was intent on landing them on the moon and SAFELY returning the brave astronauts to Kerbal. I stayed up until six in the morning but I did it. I created a three stage Saturn type rocket with the last stage containing the capsule a small fuel tank and rocket engine. This combination turned the trick. 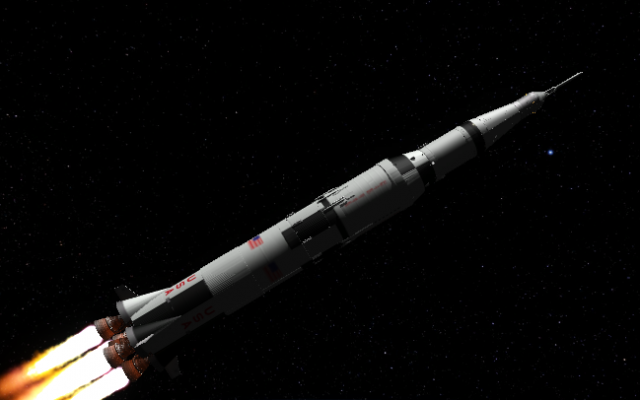 The program is not free but it is cheap. It cost me $27 for the base program and that is everything you need to get started. As you progress you can download free upgrade packs which add things like Apollo era type parts, space station parts, and even airplane parts. I actually built a Space Shuttle type system with this. The hours disappear as you mix and match various combinations to see how they all work together, The physics modeling is very good and you need to make sure your thinking about the weight, engine thrust, center of mass etc to build a good rocket. For example if you build it to tall and don’t support it on the pad it could fall over and explode. As you lift off and leave the atmosphere the rocket reacts just as it would in the vacuum of space, Upon re-entry the vehicle heats and glows red leaving a trail of fire behind it.

As you build better and better rockets you learn about orbit mechanics and how to use planets or moons gravity to adjust your flight, what the best points are to exit and orbit or enter one, how to save fuel by using the gravity of a moon or planet. The program is actually very sophisticated this way and you can learn a lot of actual rocket science with it, or you can just have some mindless fun building rockets and launching them, and blowing them up too.

I had a lot of fun creating crazy rockets with lots and lots of solid rockets, ridiculously tall, even when they just tilted over and exploded it made for a good laugh. This simulator is both fun and educational. You can get it here https://kerbalspaceprogram.com/. I was more than a little impressed with it. It is still in development but more than usable. All updates to the base program are free. There are many Youtube videos which you can watch to see how the program works and what other people have done with it. I would give this program five stars for fun and education!