Update 6/15/12 – A beta-gamma-delta field in AR1504 has developed. This could store energy for strong solar flares. NOAA  estimates a 65% chance of M-flares and a 5% chance of X-flares during the next 24 hours.

Solar Activity Forecast: Solar activity is expected to be moderate. An isolated M-class event is likely from Region 1504.

Geophysical Activity Forecast: Geomagnetic activity is expected to be quiet on 15-16 June. An increase to unsettled to active levels is expected early on day 3 (17 June) due to combined effects from both the 13 June and 14 June CMEs 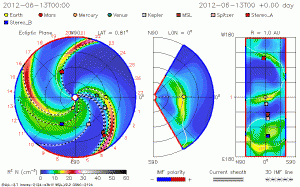 An associated CME was observed in STEREO imagery at 14/1424Z with an estimated plane-of-sky velocity between 900 and 1100 km/s. IB.