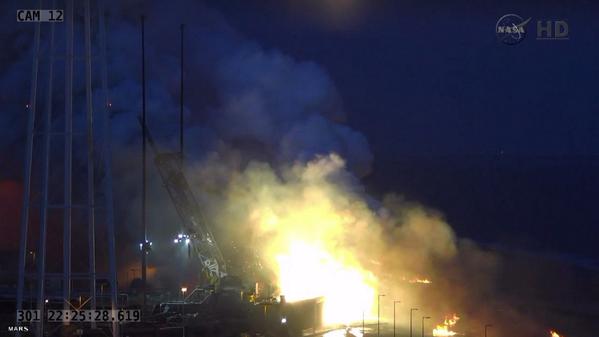 Approximately six seconds after liftoff an Antares rocket appeared to stall and fall back to the launchpad where it exploded at the Wallops Island launch facility. The International Space Station resupply mission on board an Antares Rocket was supposed to launch on October 27th but slipped one day due to a sailboat in the range safety area at launch time yesterday.

The fuel and debris were still burning 30 minutes after the launch at the time of this writing. The launch pad itself appeared to be severely damaged. There is currently no cause given for the failure, all systems appeared normal up to the time of the event. The launch had proceeded on schedule and liftoff was on time with no delays. NASA reported there were no injuries from this anomaly on the ground, this was also an unmanned re-supply mission. A failure review board is being formed to assure that all needed data is gathered and determine the path of the investigation to find the root cause of the failure.

This could cause an issue with the resupply missions to IIS, but even if no missions are launched the astronauts have enough supplies until next year. There is also a launch on October 29th from Russia to IIS already scheduled. SpaceX is also still available to send cargo to the International Space Station using their Falcon rocket.