NASA Says Earth to plunge into Darkness in December- The Truth 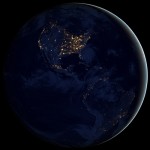 The internet is all abuzz with claims that the head of NASA Charles Bolden stated he wants the world to remain calm, but there will be three days of darkness in December 2014 due to solar storms. Well….this ranks up there with the “fact” that tablets from God were found on Mars myth which hit the internet a few years ago.

Related: Message from God on Mars?

Sorry Doomsday-ers the stores of food and water in your shelter buried deep in the woods is going to go unused. This is a total urban myth. I work at NASA every day and no one is the least bit worried. I won’t dignify the sites that are posting this as fact with a link here but here is an excerpt from one of them:

“The world will remain, during these three days, without sunlight due to a solar storm, which will cause dust and space debris to become plentiful and thus, block 90% sunlight.This is the head of NASA Charles Bolden who made the announcement and asked everyone to remain calm.”

You have to wonder why people give these stories any credence and they go viral so fast. Remember when the Mayan Calender was going to end and the world along with it back in December of 2012?  Well anyone notice its 2014 and were all here?

This latest “NASA statement” is a joke, ignore it. Go out, enjoy the holiday season, it will indeed pass with the sun still intact and continuing to shine brightly.