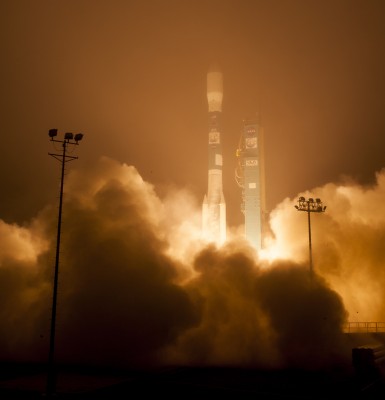 (NASA) – The Orbiting Carbon Observatory-2 (OCO-2) raced skyward from Vandenberg Air Force Base, California, on a United Launch Alliance Delta II rocket. Approximately 56 minutes after the launch, the observatory separated from the rocket’s second stage into an initial 429-mile (690-kilometer) orbit. The spacecraft then performed a series of activation procedures, established communications with ground controllers and unfurled its twin sets of solar arrays. Initial telemetry shows the spacecraft is in excellent condition.

OCO-2 soon will begin a minimum two-year mission to locate Earth’s sources of and storage places for atmospheric carbon dioxide, the leading human-produced greenhouse gas responsible for warming our world and a critical component of the planet’s carbon cycle.

“Climate change is the challenge of our generation,” said NASA Administrator Charles Bolden. “With OCO-2 and our existing fleet of satellites, NASA is uniquely qualified to take on the challenge of documenting and understanding these changes, predicting the ramifications, and sharing information about these changes for the benefit of society.”

OCO-2 will take NASA’s studies of carbon dioxide and the global carbon cycle to new heights. The mission will produce the most detailed picture to date of natural sources of carbon dioxide, as well as their “sinks” — places on Earth’s surface where carbon dioxide is removed from the atmosphere. The observatory will study how these sources and sinks are distributed around the globe and how they change over time.

“This challenging mission is both timely and important,” said Michael Freilich, director of the Earth Science Division of NASA’s Science Mission Directorate in Washington. “OCO-2 will produce exquisitely precise measurements of atmospheric carbon dioxide concentrations near Earth’s surface, laying the foundation for informed policy decisions on how to adapt to and reduce future climate change.”

Carbon dioxide sinks are at the heart of a longstanding scientific puzzle that has made it difficult for scientists to accurately predict how carbon dioxide levels will change in the future and how those changing concentrations will affect Earth’s climate.

“Scientists currently don’t know exactly where and how Earth’s oceans and plants have absorbed more than half the carbon dioxide that human activities have emitted into our atmosphere since the beginning of the industrial era,” said David Crisp, OCO-2 science team leader at NASA’s Jet Propulsion Laboratory (JPL) in Pasadena, California. “Because of this we cannot predict precisely how these processes will operate in the future as climate changes. For society to better manage carbon dioxide levels in our atmosphere, we need to be able to measure the natural source and sink processes.”

Precise measurements of the concentration of atmospheric carbon dioxide are needed because background levels vary by less than two percent on regional to continental scales. Typical changes can be as small as one-third of one percent. OCO-2 measurements are designed to measure these small changes clearly.

During the next 10 days, the spacecraft will go through a checkout process and then begin three weeks of maneuvers that will place it in its final 438-mile (705-kilometer), near-polar operational orbit at the head of the international Afternoon Constellation, or “A-Train,” of Earth-observing satellites. The A-Train, the first multi-satellite, formation flying “super observatory” to record the health of Earth’s atmosphere and surface environment, collects an unprecedented quantity of nearly simultaneous climate and weather measurements.

OCO-2 science operations will begin about 45 days after launch. Scientists expect to begin archiving calibrated mission data in about six months and plan to release their first initial estimates of atmospheric carbon dioxide concentrations in early 2015.

The observatory will uniformly sample the atmosphere above Earth’s land and waters, collecting more than 100,000 precise individual measurements of carbon dioxide over Earth’s entire sunlit hemisphere every day. Scientists will use these data in computer models to generate maps of carbon dioxide emission and uptake at Earth’s surface on scales comparable in size to the state of Colorado. These regional-scale maps will provide new tools for locating and identifying carbon dioxide sources and sinks.

OCO-2 also will measure a phenomenon called solar-induced fluorescence, an indicator of plant growth and health. As plants photosynthesize and take up carbon dioxide, they fluoresce and give off a tiny amount of light that is invisible to the naked eye. Because more photosynthesis translates into more fluorescence, fluorescence data from OCO-2 will help shed new light on the uptake of carbon dioxide by plants

OCO-2 is a NASA Earth System Science Pathfinder Program mission managed by JPL for NASA’s Science Mission Directorate in Washington. Orbital Sciences Corporation in Dulles, Virginia, built the spacecraft bus and provides mission operations under JPL’s leadership. The science instrument was built by JPL, based on the instrument design co-developed for the original OCO mission by Hamilton Sundstrand in Pomona, California. NASA’s Launch Services Program at NASA’s Kennedy Space Center in Florida is responsible for launch management. Communications during all phases of the mission are provided by NASA’s Near Earth Network, with contingency support from the Space Network. Both are divisions of the Space Communications and Navigation program at NASA Headquarters. JPL is managed for NASA by the California Institute of Technology in Pasadena.

For more information about OCO-2, visit:

OCO-2 is the second of five NASA Earth science missions scheduled to launch into space this year, the most new Earth-observing mission launches in one year in more than a decade. NASA monitors Earth’s vital signs from land, air and space with a fleet of satellites and ambitious airborne and ground-based observation campaigns. NASA develops new ways to observe and study Earth’s interconnected natural systems with long-term data records and computer analysis tools to better see how our planet is changing. The agency shares this unique knowledge with the global community and works with institutions in the United States and around the world that contribute to understanding and protecting our home planet.