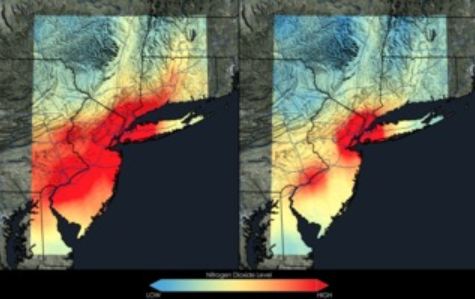 The satellites that monitor the status and health of planet Earth seemed to send down a continual stream of bad news. Melting ice sheets, CO2 increasing, oceans rising, global warming, the list seemed to go on and on. Now in some good news observations from NASA’s Aura satellite have shown a dramatic decrease in pollution levels. The image above shows the decrease in levels of nitrogen dioxide. Nitrogen dioxide is one of the six common pollutants regulated by the U.S. Environmental Protection Agency (EPA) to protect human health.This pollutant can impact the respiratory system, and it also contributes to the formation of other pollutants including ground-level ozone and particulates. The gas is produced primarily during the combustion of gasoline in vehicle engines and coal in power plants. Air pollution has decreased even though population and the number of cars on the roads have increased. The shift is the result of regulations, technology improvements and economic changes, scientists say. 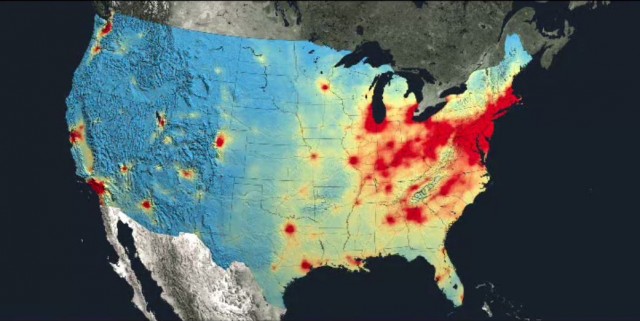 This image from 2005 shows tropospheric column concentrations of nitrogen dioxide across the U.S. as detected by the Ozone Monitoring Instrument on NASA’s Aura satellite

You can see the dramatic difference in nitrogen dioxide across the entire United States in 2005 above and in 2011 below. The Red indicates higher levels,  blue the lower levels. 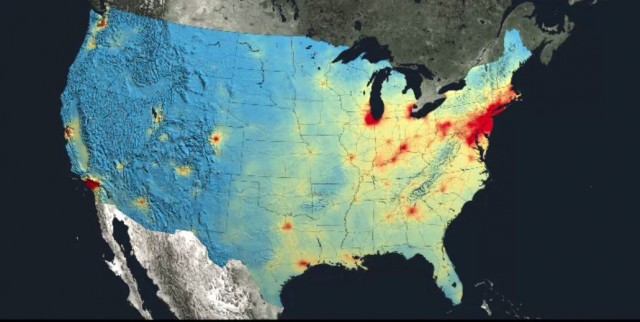 This image from 2011 shows tropospheric column concentrations of nitrogen dioxide across the U.S.

“While our air quality has certainly improved over the last few decades, there is still work to do – ozone and particulate matter are still problems,” said Bryan Duncan, an atmospheric scientist at NASA’s Goddard Space Flight Center in Greenbelt, Maryland.

Decision makers and regulatory agencies like EPA have long relied on data from ground sites to inform air quality science and forecasts. NASA, while not directly involved with regulation or making forecasts, provides a consistent, global, space-based view – not possible from any other source – of when and where air pollution occurs.

“You can’t control what you don’t measure,” said Russ Dickerson of the University of Maryland, College Park, and member of the NASA Air Quality Applied Sciences Team – created in 2011 by the NASA Applied Sciences Program to serve the needs of U.S. air quality management through the use of Earth Science satellite data, suborbital, and models. “NASA measurements of air quality have value to the people with the authority to control emissions and develop policy.”