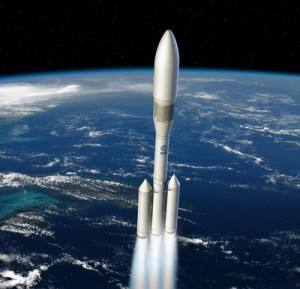 In a  two-day Council meeting  in Naples, Italy. Ministers from ESA’s 20 member states and Canada today allocated €10 billion for ESA’s programs. They approved ESA’s level of resources for 2013-17. This includes Earth Observation and also confirmed Europe’s commitment to the exploitation of the International Space Station (ISS). ESAs meeting focused on ares with high growth potential or with a direct and immediate impact on the economy such as telecommunications and meteorology.

The meeting agreed to support funding for the new launcher Ariane 6 and the continuation of the development of Ariane 5 ME .  The goal is to develop as many commonalities as possible between the two launchers. These activities are funded for two years with a decision on the continuation of both launchers to be taken in 2014.
IIn supporting NASA’s manned program Europe agreed to provide capability for the service module of NASA’s new Orion Multipurpose Crew Vehicle (MPCV) as an in-kind contribution for ISS operations for 2017–20. This decision is strategically important for Europe as it will enable a cooperation between ESA and NASA on the future human space transportation system.

Also approved was a Political Declaration towards the European Space Agency that best serves Europe. In doing so, Ministers  initiated a process able to define how ESA can adapt its operations to take benefit of both, its intergovernmental framework and the EU competence in space. They have also stated their willingness to ensure coordination and coherence between the process initiated on the ESA side and the one initiated on the EU side. This Political Declaration was also supported by Ministers from 7 of the EU member States not yet members of ESA present at the meeting.

3 thoughts on “ESA members decide to increase investments in Space”