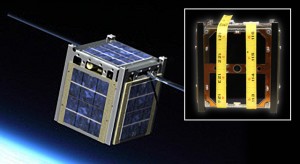 The image on the left is an artist rendering of Montana State University's Explorer 1 CubeSat. The image on the right is a CubeSat created by the University of Michigan designated the Michigan Mulitpurpose Mini-satellite, or M-Cubed. M-Cubed's mission is to obtain mid-resolution color imagery of Earth's surface and to carry the JPL/Caltech-developed CubeSat On-board processing Validation Experiment (COVE). COVE will prove an image processing algorithm designed for the Multiangle Spectro-Polarimetric Imager (MSPI) instrument utilizing the first in-space application of a new radiation-hardened FPGA processor. COVE will advance technology required for real-time, high-data-rate instrument processing relevant to future Earth science. Image credit: NASA/JPL-Caltech/Montana State University

Tiny cube satellites or cubesats are making there way into orbit. The image above is typical of cubesats that are built with small payloads by colleges, private industry and even radio clubs. These small satellites usually are launched as a secondary payload with another larger satellite. This month NASA selected 33 small satellites to fly as auxiliary payloads aboard rockets planned to launch in 2013 and 2014.

NASA has also announced a continuation of an opportunity for small satellite payloads to fly on rockets planned to launch in 2012, 2013 and 2014. These CubeSats could be auxiliary cargo on previously planned missions.

CubeSats are a class of research spacecraft called nanosatellites. The cube-shaped satellites are approximately four inches long, have a volume of about one quart and weigh less than 3 pounds.

Using commercial off the shelf parts (you can see the tape measure that us used as an antenna above!) the cost of these small satellites is greatly reduced. This allows for rapid development and puts the projects in reach of organizations with limited time and resources. While they are not going to replace their larger cousins they do have a role to play and you have to admit, their small simple design and simple uniform construction add some fun to space exploration.

One thought on “Cubesats making their way into low earth orbit”