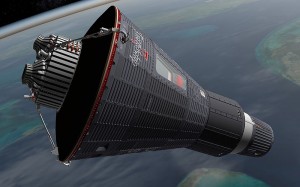 Fifty years ago Americas first astronaut went into space.  On Feb. 20, 1962 at 9:47 am EST, Glenn launched from Cape Canaveral’s Launch Complex 14 to become the first American to orbit the Earth. The capsule is now on display at the Smithsonian Institution, National Air and Space Museum, Milestones of Flight gallery.

Before joining NASA, Glenn already had a distinguished career as a pilot, receiving the Distinguished Flying Cross, Navy Unit Commendation for service in Korea, the World War II Victory Medal, the Navy’s Astronaut Wings, the NASA Distinguished Service Medal, among others.

Glenn rejoined NASA in 1998 as a member of the STS-95 Discovery crew. This 9-day mission, from Oct. 29-Nov. 7, supported a variety of research payloads including deployment of the Hubble Space Telescope Orbital Systems Test Platform and investigations on space flight and the aging process.