JWST a window into the beginning of time 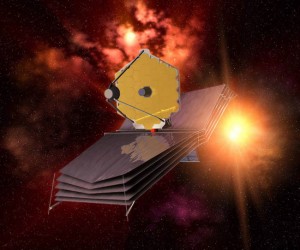 Largest Space Telescope ever, JWST can look back in time

The American space agency, NASA, is building the largest space telescope ever. The James Webb Space Telescope, named after NASA’s second director, will have a mirror seven times the size of the Hubble Space Telescope.

Exciting new discoveries await as we fly a telescope 100 times more sensitive than Hubble, almost 1000 times more sensitive than Spitzer. Roughly 8,000 astronomers who currently use Hubble and Spitzer. According to a White Paper submitted to NWNH (Sembach et al. 2009), over the period 2005–2007, the Spitzer and Hubble community generated over  3,000 papers based on Hubble and Spitzer data.  JWST is the next Hubble, the next Spitzer. Without a doubt we will discover new things about ourselves and the universe.

Until around 400 million years after the Big Bang, the Universe was a very dark place.  There were no stars, and there were no galaxies. Scientists would like to unravel the story of exactly what happened after the Big Bang.  The James Webb Space Telescope will pierce this veil of mystery and reveal the story of the formation of the first stars and galaxies in the Universe.

Webb will address several key questions to help us unravel the story of the formation of structures in the Universe such as what are the first galaxies? What did they look like, how did they form.

To find the first galaxies, Webb will make ultra-deep near-infrared surveys of the Universe, and follow up with low-resolution spectroscopy and mid-infrared photometry (the measurement of the intensity of an astronomical object’s electromagnetic radiation).  We have never been able to see this far into the past before. The challenges have been many but the value of the discoveries JWST will make are invaluable.

2 thoughts on “JWST a window into the beginning of time”