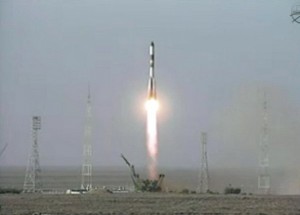 On the heals of the loss of the Phobos Grunt mission Russia has yet another failure. A Soyuz-2.1b rocket  lifted off from Pad 4 on Dec. 23, 2011, at 16:08 Moscow Time. The launch vehicle carried a Meridian No. 5 communications satellite for the Russian military. The Soyuz-2.1B rocket is part of the family of Soyuz rockets that has been the backbone of Moscow’s space program for decades and are used to launch humans for the International Space Station

The satellite was expected to establish contact however 421 seconds after the liftoff, an emergency command shut down the engine, a VKO representative said. Data showed the loss of thrust in the third stage engine was received 427 seconds into the flight. All looked normal until the 425th second in flight, when the signal from Fregat suddenly weakened. Telemetry showed that just in five seconds, Fregat’s gyroscopic sensors exceeded maximum allowable deviation of 40 degrees from its prescribed attitude, indicating tumbling of the vehicle, likely resulting from an onboard explosion.

“What happened today confirms that the (space) sector is in crisis,” the head of the Russian space agency Roskosmos, Vladimir Popofkin, told the ITAR-TASS news agency.

Its fragments crashed into the Novosibirsk region of central Siberia and were found in the Ordynsk district around 100km south of the regional capital Novosibirsk.

“A sphere was found, around 50cm in diameter, which crashed into the roof of a house in the village of Vagaitsevo” in the Ordynsk district, an official in the local security services told the Interfax news agency.

In an true irony,  the house was located on Cosmonaut Street, named after the heroic spacemen of the Soviet and Russian space program.