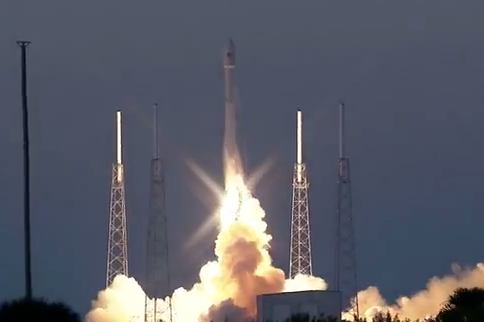 Today, right on time the SpaceX Falcon 9 lifted off in the third attempt to place the Space weather satellite DSCOVR on the other side of the moon at the L1 point, The event was picture perfect with clear blue skies and no technical glitches at all. The launch had been delayed twice, once on Sunday for failure of ground radar and again on Tuesday due to unacceptable wind levels.

The Falcon 9 launch was supposed to be followed by a soft landing of the first stage on a platform in the ocean, but this was aborted due to bad weather at the landing site. SpaceX did say they were going to attempt to soft land in the ocean anyway (not on the platform)  to gather more data on this technique, in effect practicing and learning for future attempts. This was not technically one of the goals of the mission and was always only a bonus if they could execute it.

DSCOVR is going to be used to improve our space weather predictions. Understanding the space environment is critical as this allows us to better manage and protect satellites, power grids and many other systems that are effected by space weather.