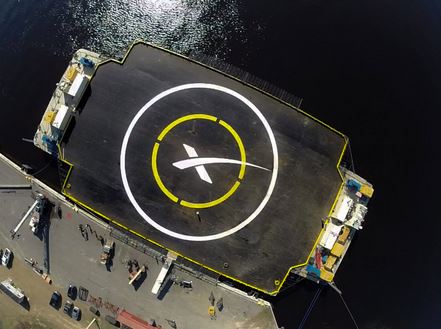 SpaceX scrubbed a flight to the International Space Station on Tuesday. The countdown was stopped  just over a minute before launch when a steering mechanism in the rocket malfunctioned — SpaceX chief Elon Musk noted via Twitte it was “behaving strangely,”

1/5/15 – While the launches to the ISS are not all that exciting anymore this one has an interesting twist. The first stage of the rocket will soft land on a barge out at sea after it’s job of boosting the payload is done. There have been several demonstrations of soft landing of the SpaceX rockets before but this is the first time a rocket that boosts the payload to orbit will then safely return to Earth. The fourteen story tall rocket will hope to set down on the 170 by 300 foot autonomous platform. The company states the odds of success about 50% at best. They do also state that this is just the first of a number of tests toward the goal of landing a rocket stage for reuse.This will be the fifth SpaceX ISS resupply mission and will launch Jan. 6, 2015 -at  6:20 a.m. Eastern.

SoaceX has previously managed to “land” first stage rockets in the sea on a non-existent landing platform. This showed the concept worked but of course the rocket was destroyed in the process. The video above shows one of these practice landings.

Tuesday’s launch will also  travel nearly parallel to the U.S. East Coast. This means that the launch could be seen as it travels along the coast. NASA starts coverage of the launch at 5:00am eastern.