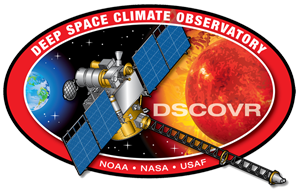 “Thanks to DSCOVR, the United States will have the uninterrupted ability to monitor space weather conditions, but in much greater detail,” said Stephen Volz, Ph.D., assistant administrator forNOAA’s Satellite and Information Service. “Those conditions can quickly turn dangerous and pose serious threats to Earth space and ground infrastructure.”

DSCOVR’s data will be used by forecasters at NOAA’s Space Weather Prediction Center (SWPC), part ofNOAA’s National Weather Service, for timely and accurate warnings of solar storms that have the potential to disrupt nearly every major public infrastructure system, including satellites, GPS, aviation and the electric power industry.

“Like weather prediction on Earth, space weather prediction begins with reliable observations,” said Louis Uccellini, Ph.D., assistant administrator at NOAA’s National Weather Service. “DSCOVR will provide the observations necessary to help us deliver targeted, critical forecasts to industries affected by space weather so they can take the necessary steps to protect infrastructure and be more resilient.”

In addition to space weather technology, DSCOVR will carry two NASA Earth-observing instruments that gather a range of measurements from ozone and aerosol amounts, to changes in Earth’s radiation.

“NASA’s Joint Agency Satellite Division is proud to have managed the refurbishment of the first operational space weather spacecraft in partnership with NOAA and the Goddard Space Flight Center,” said Steve Clarke, director of the division in NASA’s Science Mission Directorate, Washington. “The team has worked hard over the past three years to prepare the spacecraft and the instruments to enable timely space weather forecasting by NOAA and provide important Earth-observing data to NASA.”

The launch is scheduled for 6:49 p.m. EST on Jan. 23, 2015 from Cape Canaveral, Florida. It will take approximately 110 days for DSCOVR to reach the L1 (Lagrange point) orbit, between the Earth and Sun. From this position, DSCOVR is able to monitor and send information to NOAA forecasters on the surge of particles and magnetic field from the sun about an hour before it reaches Earth.

The DSCOVR mission is a partnership between NOAA, NASA and the U.S. Air Force. NOAA will operate DSCOVR from its NOAA Satellite Operations Facility in Suitland, Maryland, process data at the SWPC for distribution to users within the United States and around the world. The data will be archived at NOAA’s National Geophysical Data Center in Boulder, Colorado.

NASA received funding from NOAA to refurbish the DSCOVR spacecraft and its solar wind instruments, develop the ground segment and manage launch and activation of the satellite. The Air Force funds and oversees the launch services for DSCOVR. It also hosts NASA-funded secondary sensors for Earth and space science observations. The Earth science data will be processed at NASA’s DSCOVR Science Operations Center and archived and distributed by NASA’s Atmospheric Science Data Center