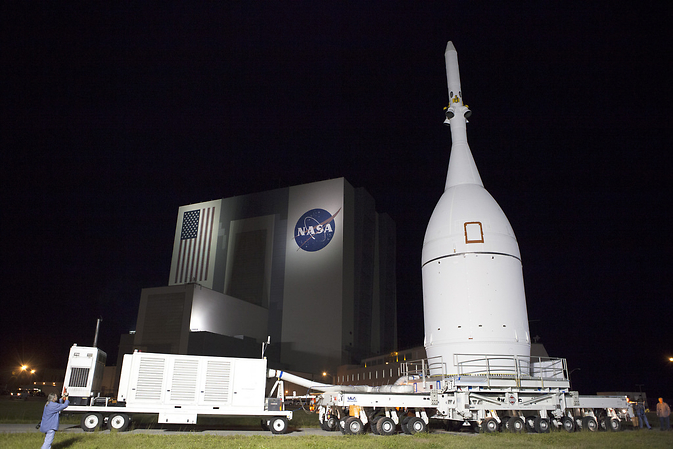 At NASA’s Kennedy Space Center in Florida, the agency’s Orion spacecraft pauses in front of the spaceport’s iconic Vehicle Assembly Building as it is transported to Launch Complex 37 at Cape Canaveral Air Force Station where, upon arrival arrival at the launch pad, United Launch Alliance engineers and technicians placed Orion atop a Delta IV Heavy rocket.
Image Credit: NASA/Frankie Martin

Related: Will NASA SLS Rocket survive when ARES did not?

Launch is scheduled for Thursday, Dec. 4 2014 at 7:05 a.m. EST from Space Launch Complex 37 at Cape Canaveral Air Force Station (CCAFS) in Florida. The window for launch is two hours 39 minutes. 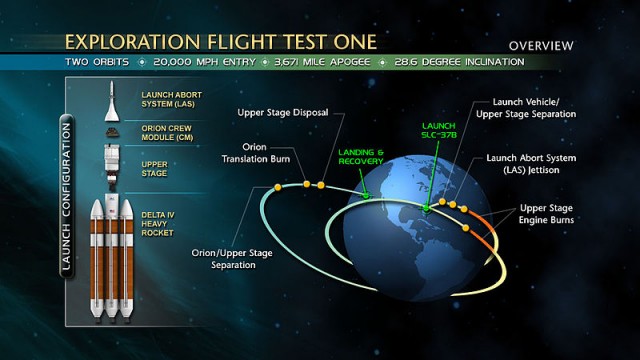 NASA TV launch commentary of the flight, designated Exploration Flight Test-1, begins at 4:30 a.m. and will continue through splashdown in the Pacific Ocean approximately 600 miles southwest of San Diego.

This will be a short flight and is deigned to test the Orion systems and simulate a high speed orbital re-entry.  The spacecraft will orbit Earth twice and travel to an altitude of 3,600 miles into space. This flight will test many of the elements that pose the greatest risk to astronauts and will provide critical data needed to improve Orion’s design and reduce risks to future mission crews.