Will NASA SLS Rocket survive when ARES did not? 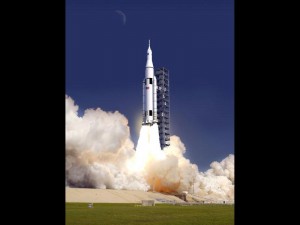 NASA recently announced development of a new heavy lift rocket. The pictures of this new rocket look very much like the Apollo era Saturn V. It appears NASA wants to suggest a Saturn V like heritage. With the recent cancellation of the Constellation program and the ARES V heavy lift rocket one wonders what will be different that will allow the SLS Rocket to succeed where the ARES did not. Both launch systems are heavy lift rockets intended to get us to the Moon and beyond. Both designed by NASA, both have basically the same charter. To help understand the issue lets compare some of the specifications of the two rockets:

The Ares V design incorporated six RS-68 engines with assistance from a pair of 5.5-segment SRBs. Five Space Shuttle Main Engines(SSME) were originally planned for the Ares V, but the RS-68 engines are more powerful and less complex and therefore less expensive than the SSMEs. (Remember this when you read about the SLS engines.)

SLS design will use the RS-25D/E engines from the Space Shuttle Program for the core stage and the J-2X engine for the upper stage. Hmmmm….ARES was going to use the RS-68 as they are less complex and less expensive. What changed that the SLS program decided to use the more expensive and complex Shuttle engines? See Comment Below – The choice was made due to the human space flight requirements of the engine.

Both programs have the final price tag of > 40 Billion dollars and estimates run about 1 billion per launch once development is done. Lets compare to the Shuttle. When all  costs are taken into account the cost of the Space Shuttle program, averaged over all missions, adjusted for inflation, was about $1.5 billion per launch. Will these new SLS rockets really be less? Perhaps, but if history is a guide they will not be. As a comparison the Proton Rocket costs about 150 million to launch. The SpaceX Falcon Heavy will lift 53 Metric Tons and will only cost $80-$125 Million per launch. (Read more about Falcon  here).

When you look at the details, and compare Ares V to SLS the ARES V had a shorter development cycle, heavier lift at the same projected cost, but it was canceled. The actual cost if the Ares could have been much higher.

This point is not lost on some of our government representatives. The Space Review panel also criticized that the SLS plan will be too costly draining resources from NASA’s other projects. Rep. Dana Rohrabacher added, “…this plan will suffer the same fate as Constellation: over promised, under-delivered, and canceled. Where will we be then?”

Why will the SLS program succeed and not just be another money pit to pour tax dollars into? Maybe someone at NASA knows some magic the rest of us do not. Having a U.S.  built heavy lift rocket is a noble goal. Just as the Saturn 5 and ARES V programs had to be canceled due to high operations cost is there any reason to think SLS will succeed. It appears nothing has fundamentally changed.

There are other alternatives already in development or sitting on the shelf in the private sector that can accomplish the goals of NASA.  Perhaps the dollars being spent on the SLS could fund totally new programs instead of duplicating what in effect already exists in the private sector.

Hopefully we are wrong but even with the current proposed numbers this is a bad investment. Just as we saw with Space Shuttle and Ares the estimates are probably low, and by a lot. Maybe it is time to put the words into action and use the private sector to provide this capability. Only time will tell but the SLS program, as wonderful as it could be, already looks like a white elephant.

16 thoughts on “Will NASA SLS Rocket survive when ARES did not?”