Wow! Hubble is 24 and celebrates with stunning starbirth image 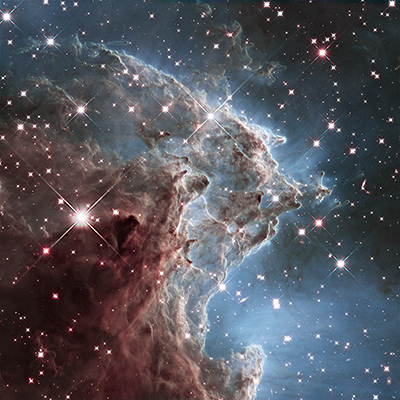 It is hard to believe, Hubble is 24 years old. Launched on April 24, 1990 astronomers have taken an infrared-light portrait of a roiling region of starbirth located 6,400 light-years away.

To produce images like this after being in orbit for 24 years is …well..amazing. It is still the premier and most publicly known space telescope, decades later. That is a good thing and a testament to the engineers that built it, but also a rather sad statement when you consider it’s replacement, the James Webb Space Telescope was supposed to launch years ago and is now set for a 2018 launch.

Related: Is JWST out of focus or have we lost our vision?

The Hubble mosaic unveils a collection of carved knots of gas and dust in a small portion of the Monkey Head Nebula (also known as NGC 2174 and Sharpless Sh2-252). The nebula is a star-forming region that hosts dusky dust clouds silhouetted against glowing gas.

Massive, newly formed stars near the center of the nebula (and toward the right in this image) are blasting away at dust within the nebula. Ultraviolet light from these bright stars helps carve the dust into giant pillars. The nebula is mostly composed of hydrogen gas, which becomes ionized by the ultraviolet radiation.

As the interstellar dust particles are warmed from the radiation from the stars in the center of the nebula, they heat up and begin to glow at infrared wavelengths.

The image demonstrates Hubble’s powerful infrared vision and offers a tantalizing hint of what scientists can expect from the upcoming James Webb Space Telescope.