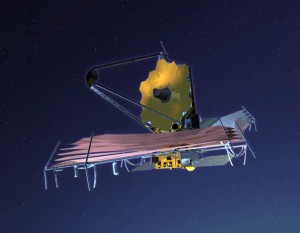 It is hard to believe that there was a time when the James Webb Space Telescope was supposed to launch in the first decade of the new century. The new launch date, which has slipped several times, is now 2018. It does appear that real progress is being made though. As can be seen in the live clean room camera at Goddard Space Flight Center where the instrument sections of the satellite are being constructed. Recently the telescope also had its cameras installed. Being one of the most expensive projects NASA is undertaking this important mission is finally making real strides towards launch after delays, not so much due to technical issues, but due to financial issues. The head of NASA issued a statement about how important this mission is and the dedication of NASA to it.The funding for the mission was spread over several extra years in order to keep the mission going. These delays ultimately wind up costing the taxpayers more money in the long run as opposed to just building the satellite as planned but that is a topic for another post.

For now it is good news that there is actually hardware in clean rooms being put together to create this mighty telescope. With the recent addition of the backplane support frame, a fixture that will be used to connect all the pieces of the telescope together.

The backplane support frame also will keep the light path aligned inside the telescope during science observations. Measuring 11.5 feet by 9.1 feet by 23.6 feet and weighing 1,102 pounds, it is the final segment needed to complete the primary mirror backplane support structure. This structure will support the observatory’s weight during its launch from Earth and hold its18-piece, 21-foot-diameter primary mirror nearly motionless while Webb peers into deep space.

“Fabricating and assembling the backplane support frame of this size and stability is a significant technological step as it is one of the largest cryogenic composite structures ever built,” said Lee Feinberg, James Webb Space Telescope optical telescope element manager at NASA’s Goddard Space Flight Center in Greenbelt, Md.

The frame, which was built at room temperature but must operate at temperatures ranging from minus 406 degrees to minus 343 degrees Fahrenheit, will undergo extremely cold, or cryogenic, thermal testing at NASA’s Marshall Space Flight Center in Huntsville, Ala. The backplane support frame and primary mirror backplane support structure will shrink as they cool down in space. The tests, exceeding the low temperatures the telescope’s backbone will experience in space, are to verify the components will be the right size and operate correctly in space.

The primary mirror backplane support structure also will meet unprecedented thermal stability requirements to minimize heat distortion. While the telescope is operating at a range of extremely cold temperatures, from minus 406 degrees to minus 343 degrees Fahrenheit, the backplane must not vary more than 38 nanometers (approximately 1 one-thousandth the diameter of a human hair).

The primary backplane support structure is made of lightweight graphite materials using and advanced fabrication techniques. The composite parts are connected with precision metallic fittings made of invar and titanium.

The assembled primary backplane support structure and backplane support frame are scheduled for delivery to Marshall later this year for the extreme cryogenic thermal testing. They will undergo structural static testing at Northrop Grumman’s facilities in Redondo Beach, Calif. in early 2014, and then be combined with the wing assemblies.

The James Webb Space Telescope, the successor to NASA’s Hubble Space Telescope, will be the most powerful space telescope ever built. It will observe the most distant objects in the universe, provide images of the first galaxies formed and see unexplored planets around distant stars. The Webb telescope is a joint project of NASA, the European Space Agency and the Canadian Space Agency.