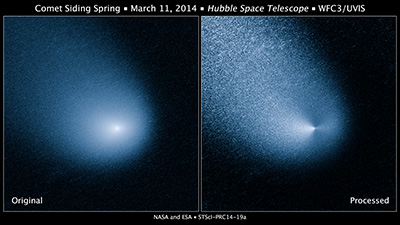 Comet Siding Spring is plunging toward the Sun along a roughly 1-million-year orbit. The comet, discovered in 2013, was within the radius of Jupiter’s orbit when the Hubble Space Telescope photographed it on March 11, 2014. Hubble resolves two jets of dust coming from the solid icy nucleus. These persistent jets were first seen in Hubble pictures taken on Oct. 29, 2013. The feature should allow astronomers to measure the direction of the nucleus’s pole, and hence, rotation axis. The comet will make its closest approach to our Sun on Oct. 25, 2014, at a distance of 130 million miles, well outside Earth’s orbit. On its inbound leg, Comet Siding Spring will pass within 84,000 miles of Mars on Oct. 19, 2014, which is less than half the Moon’s distance from Earth. The comet is not expected to become bright enough to be seen by the naked eye.

This is a Hubble Space Telescope picture of comet C/2013 A1 Siding Spring as observed on March 11, 2014. At that time the comet was 353 million miles from Earth. The solid icy nucleus is too small to be resolved by Hubble, but it lies at the center of a dust cloud, called a coma, that is roughly 12,000 miles across in this image.

When the glow of the coma is subtracted through image processing, which incorporates a smooth model of the coma’s light distribution, Hubble resolves what appear to be two jets of dust coming off the nucleus in opposite directions. This means that only portions of the surface of the nucleus are presently active as they are warmed by sunlight, say researchers. These jets were first seen in Hubble pictures taken on Oct. 29, 2013. The feature should allow astronomers to measure the direction of the nucleus’s pole, and hence, rotation axis.