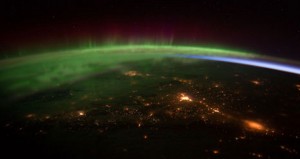 Imagery taken by astronauts on station includes flights over nighttime U.S. and views of the aurora borealis over Canada and the Pacific.

A CME that left the sun on March 15th is expected to ompact Earth’s magnetic field on March 17th.

Earlier Warhing – On March 15th a Space Weather Watch was issued by NOAA. There have been several warnings throughout the past 24 hours and they are now predicting a geomagnetic storm which will cause the Auroras to become more prominent. They may be seen well into areas as low as the northern United States. This kind of storm can also effect power grids, and satellite operations. You can monitor current space weather on the KnowledgeOrb space weather page. Aurora viewing updates can be seen on the KnowledgeOrb Aurora viewing page.  If you would like to get an email any time there is a Space Weather event subscribe to the KnowledgeOrb Space Weather Email Service.

Text of  Alerts/Warnings listed below:

THIS SUPERSEDES ANY/ALL PRIOR WATCHES IN EFFECT

Space weather for the past 24 hours has been minor.
Radio blackouts reaching the R1 level occurred.

Space weather for the next 24 hours is predicted to be minor.
Geomagnetic storms reaching the G1 level are likely.