Hot Spot on Saturn is largest ever seen 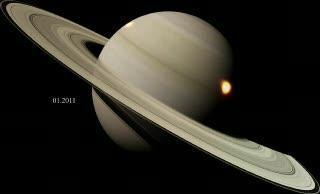 Earlier this yer a large hot spot appeared on Saturn. This spot was unusually large and hot. It was captured in the video below by Cassini. NASA’s Cassini spacecraft detected the regional temperature spike of 150 degrees Fahrenheit (84 degrees Celsius)—the biggest jump ever recorded in our solar system.

“We were quite shocked when we detected the temperature change—nothing like that was ever observed before,” said University of Maryland research scientist Brigette Hesman, of the Cassini team. “It was not at all what we expected.”

The storm created a cloud cover on circled the gas giant planet in a band 9,000 miles (14,500 kilometers) wide.  In addition to this large temperature change Cassini also detected  a large deposit of the hydrocarbon gas ethylene, a byproduct of methane previously seen only in trace amounts in the Saturn atmosphere. How ethylene became so prevalent is a mystery.

“We know this was all caused by a big storm in the lower atmosphere,” where temperatures are warm enough for water to condense and form clouds, Hesman said.

3 thoughts on “Hot Spot on Saturn is largest ever seen”