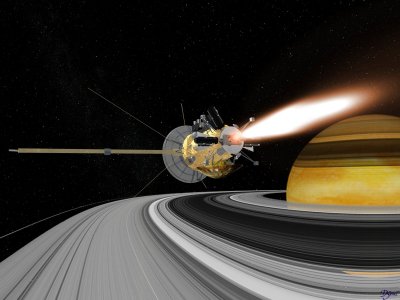 The Cassini Spacecraft was launched to Saturn in 2004. Since then it has inspired the world with increadable imagages and science data from the ringed planet and it’s moons. Since it launched on Oct. 15, 1997, the spacecraft has traveled more than 3.8 billion miles (6.1 billion kilometers). Cassini has sent back some 444 gigabytes of scientific data so far, including more than 300,000 images.

This NASA video highlights sights and sounds from the journey of NASA’s Cassini spacecraft.

“As Cassini conducts the most in-depth survey of a giant planet to date, the spacecraft has been flying the most complex gravity-assisted trajectory ever attempted,” said Robert Mitchell, Cassini program manager at NASA’s Jet Propulsion Laboratory in Pasadena, Calif. “Each flyby of Titan, for example, is like threading the eye of the needle. And we’ve done it 87 times so far, with accuracies generally within about one mile [1.6 kilometers], and all controlled from Earth about one billion miles [1.5 billion kilometers] away.”

“I’m proud to say Cassini has accomplished all of this every year on-budget, with relatively few health issues,” Mitchell said. “Cassini is entering middle age, with the associated signs of the passage of years, but it’s doing remarkably well and doesn’t require any major surgery.”