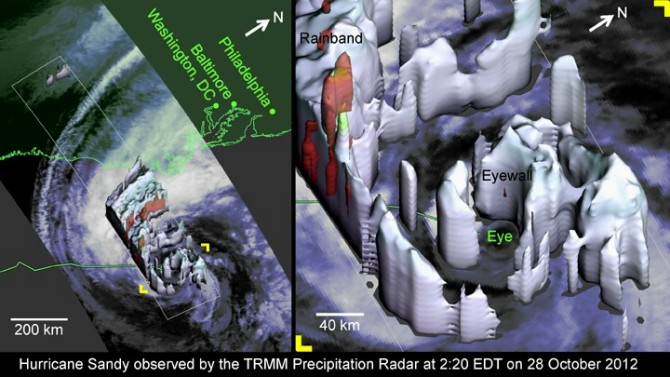 At 2:20 p.m. EDT on Sunday, Oct. 28, Hurricane Sandy was a marginal category 1 hurricane and its eyewall is modest, as TRMM reveals, which gives forecasters and scientists hints about its possible future strength.

The eyewall appeared somewhat compact with its 40 km (24.8 miles) diameter. The eyewall contained only relatively light precipitation, and none of Sandy’s eyewall storm cells managed to burst through, or even reach, the tropopause which has about a 10 km (6.2 miles) height at mid-latitudes. Evidence of the weak updrafts in the eyewall comes from the fact that the TRMM radar’s reflectivity stayed under 40 dBZ, a commonly cited signal strength at which updrafts can be vigorous enough to form hail and to lift smaller ice particles up through the tropopause and into the stratosphere.

But placed in context, the TRMM-observed properties of Hurricane Sandy’s eyewall are evidence of remarkable vigor. Most hurricanes only have well-formed and compact eyewalls at category 3 strength or higher. Sandy was not only barely a category 1 hurricane, but Sandy was also experiencing strong wind shear, Sandy was going over ocean typically too cold to form hurricanes, and Sandy had been limping along as a marginal hurricane for several days.