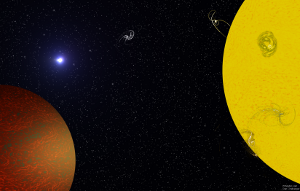 NASA issues a statement about the Alpha Centuri Exoplanet Discovery, are they a little embarrassed?

As reported by KnowledgeOrb earlier this week an Earth sized exoplanet was discovered orbiting our nearest solar neighbor Alpha Centuri. While this planet is not in the habitable zone it is only 4.4 light years away. In the NASA statement Dr. John Grunsfeld has a short congratulations on the new discovery, the rest of the press release is used to remind us of the current and future exoplanet discovery missions at NASA. It seems as if NASA may be a little red faced at the fact that they did not find this planet located at our nearest solar neighbor.  This planet was discovered using earth based telescopes at the European Southern Observatory.

The NASA Kepler Telescope has discovered dozens of planets, some of which are in a temperature zone which could support life. Being on the cutting edge of this work, and clearly the leader in this field, perhaps NASA is wondering “why didn’t we think of that” when they heard of the work by Europe to find a planet at the closest star to Earth. In any case one could bet that Kepler and other NASA assets will be turned towards Alpha Centuri as there is still a possibility that a planet could exist in the habitable zone there. Now that we know there are planets orbiting Alpha Centuri there is a good chance there are others.

See the NASA press release on this topic below:

“We congratulate the European Southern Observatory team for making this exciting new exoplanet discovery. For astronomers, the search for exoplanets helps us understand our place in the universe and determine whether Earth is unique in supporting life or if it is just one member of a large community of habitable worlds. NASA has several current and future missions that will continue in this search.

“An example is NASA’s Kepler mission. It was specifically designed to survey a specific region of our Milky Way galaxy to detect Earth-size and smaller planets in or near the habitable zone — that region around a star where it is theoretically possible for a planet to maintain liquid water on its surface — and determine the fraction of the hundreds of billions of stars in our galaxy that might have such planets. Kepler works very differently from HARPS. Rather than detecting the wobble in the host star, Kepler detects the slight dimming of a star when a planet passes in front of it.

“NASA’s James Webb Space Telescope (JWST) will provide a unique facility that will serve through the next decade as the mainstay for characterization of transiting exoplanets. The main transit studies JWST will be able to undertake are: discovery of unseen planets, determining exoplanet properties like mass, radius, and physical structure, and characterizing exoplanet atmospheres to determine things like their temperature and weather. If there are other planets in the Alpha Centauri system farther from the star, JWST may be able to detect them as well through imaging.

“NASA is also studying two medium-class exoplanet missions in our Explorer program, and in the spring of 2013 will select one of them to enter development for flight later in the decade.”

One thought on “NASA Reacts to European Discovery of Earth Size Planet, Embarrassment?”