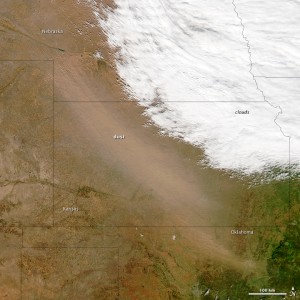 In the 1930s the Great Plains became know as the great dust bowl when hugs dust storms were created from a long period of heat an drought. In October 2012 the MODIS instrument on the AQUA satellite captured a large dust storm created by similar conditions caused by months if drought. The storm happened on October 18th 2012. The dust appeared to have source points in southern Nebraska, though more localized sources in Kansas and Oklahoma also may have contributed. Many farms in the region are plowed in the fall for the planting of winter crops, so soils were loosened and ready for pickup by the wind.

High winds carried the dust as high as 4000 feet into the air.  These winds cause blackouts in some areas and were reported to tip over trucks. The problem was added to by the fact that farmers were plowing fields. This is very similar to the dust bowl conditions in the 1930s