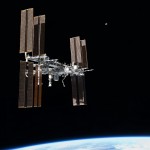 WASHINGTON — As part of NASA’s ongoing live coverage of mission operations aboard the International Space Station, NASA Television will broadcast the attempted redocking of an unpiloted Russian cargo spacecraft to the space station for engineering data collection beginning at 5 p.m. EDT Saturday, July 28. Docking is scheduled for 9 p.m.

The ISS Progress 47 resupply ship arrived at the station in April and undocked from the Pirs docking compartment July 22. It made its first attempt to re-dock the following day. A technical problem prevented the spacecraft from reaching the space station, and its computers placed it a safe distance from the orbiting laboratory. Russian engineers are testing a new automated rendezvous system, called Kurs-NA, for possible use on future Russian spacecraft arriving at the station.