Idea for a X-ray Mirror Inspired by Scotch Tape 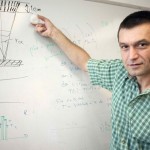 Scotch tape is the inspiration behind a completely new kind of x-ray mirror for telescopes. The concept was dreamed up by Maxim Markevich a NASA Scientist.

“I remember looking at a roll of Scotch tape and thinking, ‘Was it possible to use the same design for capturing hard X-rays?'” Markevitch explained in a NASA statement. “I talked with a few people, and to my surprise, they didn’t see any principal reasons why it couldn’t be done.”

Markevitch and his team have begun testing materials that could potently be used to build a rolled mirror that is sensitive enough to collect hard x-rays from deep space.

There are several telescopes that scan for X-rays today, including NuSTAR. This new concept will fix the problem NuSTAR has, witch is it has limited collecting areas that allow them to only “graze the surface” of possible discoveries in the hard X-ray realm.

To get the job done right they will need a collecting area about 30 times larger then that of NuSTAR.

“However, to our knowledge, nothing of the kind is planned or even proposed in the U.S. or elsewhere because of the cost something like this presents,” Markevitch said.
For now it is just a concept