NASA – For nearly 35 years, NASA’s Voyager 1 probe has been hurtling toward the edge of the solar system, flying through the dark void on a mission unlike anything attempted before. One day, mission controllers hope, Voyager 1 will leave the solar system behind and enter the realm of the stars—interstellar space.

That day may be upon us.

“The latest data from Voyager 1 indicate that we are clearly in a new region where things are changing quickly,” says Ed Stone, Voyager project scientist at the California Institute of Technology in Pasadena. This is very exciting. We are approaching the solar system’s final frontier.”

The “frontier” he’s referring to is the edge of the heliosphere, a great magnetic bubble that surrounds the sun and planets. The heliosphere is the sun’s own magnetic field inflated to gargantuan proportions by the solar wind. Inside lies the solar system—“home.” Outside lies interstellar space, where no spacecraft has gone before.

A telltale sign of the frontier’s approach is the number of cosmic rays hitting Voyager 1. Cosmic rays are high energy particles such as protons and helium nuclei accelerated to near-light speed by distant supernovas and black holes. The heliosphere protects the solar system from these subatomic bullets, deflecting and slowing many of them before they can reach the inner planets.

As Voyager approaches the frontier, the number of cosmic rays has gone up.

“From January 2009 to January 2012, there had been a gradual increase of about 25 percent in the amount of galactic cosmic rays Voyager was encountering,” says Stone. 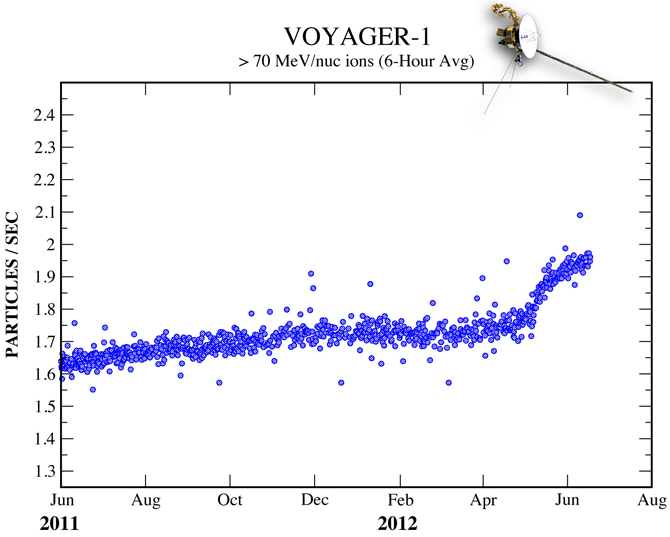 “More recently, however, we have seen a very rapid escalation in that part of the energy spectrum. Beginning on May 7, 2012, the cosmic ray hits have increased five percent in a week and nine percent in a month.”

The sharp increase means that Voyager 1 could be on the verge of a breakthrough 18 billion kilometers from Earth. 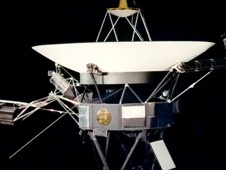 Artists rendering of the Voyager spacecraft. Credit: NASA When Voyager 1 actually exits the heliosphere, researchers expect to see other changes as well. For one thing, energetic particles from the sun will become scarce as the spacecraft leaves the heliosphere behind. Also, the magnetic field around Voyager 1 will change direction from that of the sun’s magnetic field to that of the new and unexplored magnetism of interstellar space.

So far, neither of these things has happened. Nevertheless, the sudden increase in cosmic rays suggests it might not be long.

Meanwhile, Voyager 2 is making its own dash for the stars, but because of its slower pace lags a few billion kilometers behind Voyager 1. Both spacecraft remain in good health.

“When the Voyagers launched in 1977, the Space Age was all of 20 years old,” says Stone. “Many of us on the team dreamed of reaching interstellar space, but we really had no way of knowing how long a journey it would be — or if these two vehicles that we invested so much time and energy in would operate long enough to reach it. ”

As the Space Age nears the 55-year mark, there is little doubt: The Voyagers are going the distance.

For more news from the edge of the solar system, please visit http://voyager.jpl.nasa.gov.