Asteroid That Flew By Is Larger Then We Thought. 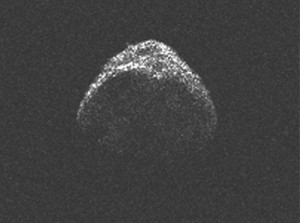 The flyby did allow astronomers to train the planetary radar system at the Arecibo Observatory on asteroid 2012 LZ1 and find that its size was  underestimated. 2012 LZ1 was thought to be about the size of a city block, but based on its brightness as it passed us, scientists now say the asteroid’s size is twice that, measuring about 0.6 miles

“This object turned out to be quite a bit bigger than we expected, which shows how important radar observations can be, because we’re still learning a lot about the population of asteroids,” said research team member Ellen Howell.

A astrid that size would likly cause global consequences if it hit Earth, the researchers said.

“The sensitivity of our radar has permitted us to measure this asteroid’s properties and determine that it will not impact the Earth at least in the next 750 years,” said Mike Nolan.