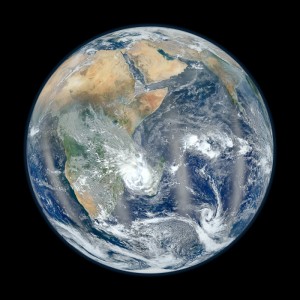 NASA – Suomi NPP took an incredible new Blue Marble Earth picture featuring the United States at it’s center and they now have released this image of the Eastern Hemisphere. The new image is a composite of six separate orbits taken on January 23, 2012 by the Suomi National Polar-orbiting Partnership satellite. Both of these new ‘Blue Marble’ images are images taken by a new instrument flying aboard Suomi NPP, the Visible Infrared Imaging Radiometer Suite (VIIRS).

Compiled by NASA Goddard scientist Norman Kuring, this image has the perspective of a viewer looking down from 7,918 miles (about 12,742 kilometers) above the Earth’s surface from a viewpoint of 10 degrees South by 45 degrees East. The four vertical lines of ‘haze’ visible in this image shows the reflection of sunlight off the ocean, or ‘glint,’ that VIIRS captured as it orbited the globe. 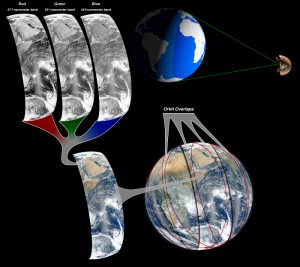 The Suomi NPP satellite is in a polar orbit around Earth at an altitude of 512 miles (about 824 kilometers), but the perspective of the new Eastern hemisphere ‘Blue Marble’ is from 7,918 miles (about 12,743 kilometers). NASA scientist Norman Kuring managed to ‘step back’ from Earth to get the big picture by combining data from six different orbits of the Suomi NPP satellite. Or putting it a different way, the satellite flew above this area of Earth six times over an eight hour time period.