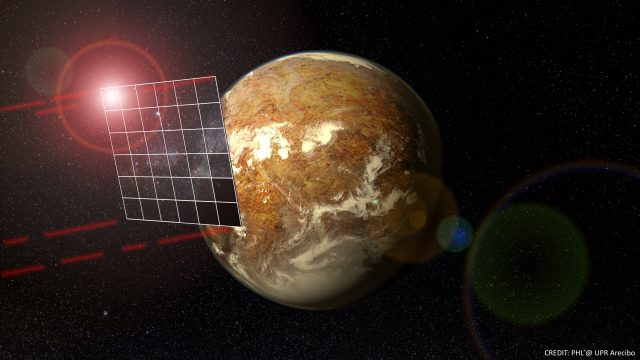 Artist concept of an Autonomous Active Sail (AAS) approaching the potentially habitable exoplanet Proxima b. The reflection of Proxima Centauri and background stars are seen on the mirror-like surface of the sail. Four communication lasers beams are shown firing from its corners to transmit information back to Earth. The lower right panels of the sail are in the process of becoming darker to change its direction and orientation from differences in radiation pressure. Credit: PHL @ UPR Arecibo.

(Source PHL @ UPR Arecibo.) – In April last year, billionaire Yuri Milner announced the Breakthrough Starshot Initiative. He plans to invest 100 million US dollars in the development of an ultra-light light sail that can be accelerated to 20 percent of the speed of light to reach the Alpha Centauri star system within 20 years. The problem of how to slow down this projectile once it reaches its target remains a challenge. René Heller of the Max Planck Institute for Solar System Research in Göttingen and his colleague Michael Hippke propose to use the radiation and gravity of the Alpha Centauri stars to decelerate the craft. It could then even be rerouted to the red dwarf star Proxima Centauri and its potential Earth-like planet Proxima b.
In the recent science fiction film Passengers, a huge spaceship flies at half the speed of light on a 120-year-long journey toward the distant planet Homestead II, where its 5000 passengers are to set up a new home. This dream is impossible to realize at the current state of technology. “With today’s technology, even a small probe would have to travel nearly 100,000 years to reach its destination,” René Heller says.
Notwithstanding the technical challenges, Heller and his colleague Michael Hippke wondered, “How could you optimize the scientific yield of this type of a mission?” Such a fast probe would cover the distance from the Earth to the Moon in just six seconds. It would therefore hurtle past the stars and planets of the Alpha Centauri system in a flash.
The solution is for the probe’s sail to be redeployed upon arrival so that the spacecraft would be optimally decelerated by the incoming radiation from the stars in the Alpha Centauri system. René Heller, an astrophysicist working on preparations for the upcoming Exoplanet mission PLATO, found a congenial spirit in IT specialist Michael Hippke, who set up the computer simulations.
The two scientists based their calculations on a space probe weighing less than 100 grams in total, which is mounted to a 100,000-square-metre sail, equivalent to the area of 14 soccer fields. During the approach to Alpha Centauri, the braking force would increase. The stronger the braking force, the more effectively the spacecraft’s speed can be reduced upon arrival. Vice versa, the same physics could be used to accelerate the sail at departure from the solar system, using the sun as a photon cannon.
The tiny spacecraft would first need to approach the star Alpha Centauri A as close as around four million kilometres, corresponding to five stellar radii, at a maximum speed of 13,800 kilometres per second (4.6 per cent of the speed of light). At even higher speeds, the probe would simply overshoot the star.
During its stellar encounter, the probe would not only be repelled by the stellar radiation, but it would also be attracted by the star’s gravitational field. This effect could be used to deflect it around the star. These swing-by-manoeuvres have been performed numerous times by space probes in our solar system. “In our nominal mission scenario, the probe would take a little less than 100 years – or about twice as long as the Voyager probes have now been travelling. And these machines from the 1970s are still operational,” says Michael Hippke.
Theoretically, the autonomous, active light sail proposed by Heller and Hippke could settle into a bound orbit around Alpha Centauri A and possibly explore its planets. However, the two scientists are thinking even bigger. Alpha Centauri is a triple star system. The two binary stars A and B revolve around their common centre of mass in a relatively close orbit, while the third star, Proxima Centauri, is 0.22 light years away, more than 12,500 times the distance between the Sun and the Earth.
The sail could be configured so that the stellar pressure from star A brakes and deflects the probe toward Alpha Centauri B, where it would arrive after just a few days. The sail would then be slowed again and catapulted towards Proxima Centauri, where it would arrive after another 46 years − about 140 years after its launch from Earth. 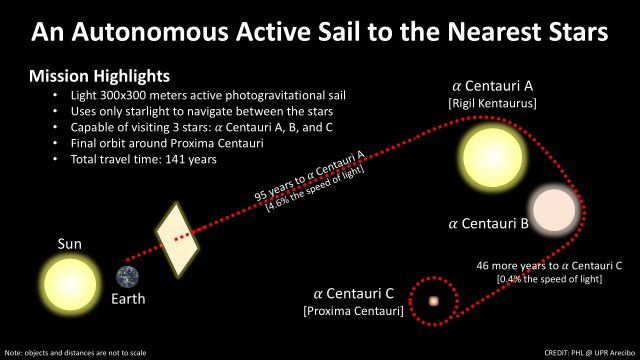 An interstellar mission of an Autonomous Active Sail (AAS) to the nearest three stars. The sail uses an active reflective surface to change its direction and orientation from photogravitational assists from the stars, including the Sun. A light 90 grams sail could take nearly 100 years to reach Alpha Centauri A and another 50 years to Proxima Centauri. Many engineering challenges will need to be solved to pack enough communication and science instruments in such light but wide interstellar probes. Credit: PHL @ UPR Arecibo.

Proxima Centauri caused a sensation in August 2016 when astronomers at the European Southern Observatory (ESO) discovered an exoplanet companion that is about as massive as the Earth and that orbits the star in its so-called habitable zone. This makes it theoretically possible for liquid water to exist on its surface – water being a key prerequisite for life on Earth.
“This finding prompted us to think about the possibility of stopping a high-velocity interstellar lightsail at Proxima Centauri and its planet,” says René Heller. The Max Planck researcher and his colleague propose another change to the strategy for the Starshot project: instead of a huge energy-hungry laser, the Sun’s radiation could be used to accelerate a nanoprobe beyond the solar system. “It would have to approach the Sun to within about five solar radii to acquire the necessary momentum,” Heller says.
The two astronomers are now discussing their concept with the members of the Breakthrough Starshot Initiative, to whom they owe the inspiration for their study. “Our new mission concept could yield a high scientific return, but only the grandchildren of our grandchildren would receive it. Starshot, on the other hand, works on a timescale of decades and could be realized in one generation. So we might have identified a longterm, follow-up concept for Starshot,” Heller says.
Although the new scenario is based on a mathematical study and computer simulations, the proposed hardware of the sail is already being developed in laboratories today: “The sail could be made of graphene, an extremely thin and light but mega-tough carbon film,” René Heller says. The film would have to be blanketed by a highly reflective cover to endure the harsh conditions of deep space and the heat near the destination star.
The optical and electronic systems would have to be tiny. But if you were to remove all the unnecessary components from a modern smartphone, “only a few grams of functional technology would remain.” Moreover, the lightweight spacecraft would have to navigate independently and transmit its data to Earth by laser. To do so, it would need energy, which it could harness from the stellar radiation.
Breakthrough Starshot therefore poses daunting challenges that have so far only been solved theoretically. Nevertheless, “many great visions in the history of mankind had to struggle with seemingly insurmountable obstacles,” Heller says. “We could soon be entering an era in which humans can leave their own star system to explore exoplanets using fly-by missions.”