Tough Choice, Man to Mars or Robots to the Universe 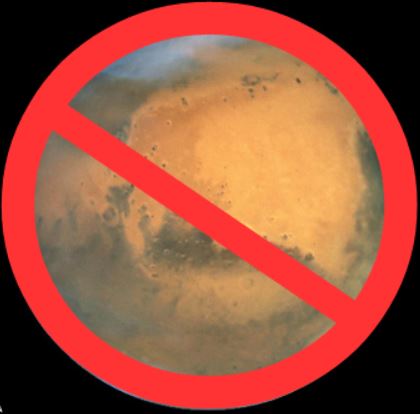 Should we send men to Mars? Is that the best way to spend our money and does it answer the most fundamental questions?

This week NASA announced that there are two moons in our own solar system with liquid water oceans. These also contain the chemicals and energy sources needed for life. Cassini scientists announce chemical energy that life could feed on appears to exist on Saturn’s moon Enceladus, also Hubble researchers found additional evidence in plumes erupting from Jupiter’s moon Europa. These findings could help answer the question man has been asking for as long as we have looked at the stars at night, are we alone? Yet we spend such a small pittance of our NASA budget to find the answers to these questions. NASA’s current direction is “Man on Mars by the 2030s”. This will require much of the budget and effort for the foreseeable future of NASA to achieve. Putting man on Mars in the 2030s will be like mining for the element Un-obtainum.

There are several reasons for this. First of all I want to say we will eventually get to Mars, but not by the 2030’s. We have a way of deluding ourselves we will be much more advanced and capable than we actually become in a few decades…remember 2001 A Space Odyssey? In the late 1960’s we thought we would be at Mars and beyond by 2001. Well, it was not to be. After the heady success of the Apollo missions anything seemed possible. We had a nation behind that mission and the budget to match. NASA’s SLS is the rocket we are proposing to get to Mars, but guess what, the odds are and history proves, it will be behind schedule and over budget. There are many other technological hurdles to cross. Solving the issues of protecting fragile humans from radiation, providing food, air, and how to get home all remain. These are not trivial. Along the way we could also kill an astronaut. What happens to public support and the funding when that happens? Until we have more mature technology, stronger public support, a more realistic budget, and a realistic time line, sending man to Mars is a fool’s errand and we should spend what limited resources we do have more wisely.

We DO however have the technology and budget TODAY to do real robotic missions to our solar system and beyond. NASA should add the “Search for Life” as one of its primary goals. A specific goal like this would server to give the agency direction and is a clear path the public can get behind, understand and support. For decades missions have been proposed, and canceled or never started to these moons on which we have now found oceans and chemistry capable of supporting life. Why is the basic fundamental goal of finding life outside our own planet not a primary goal of the Space Agency? We skirt around the edges of that goal. Kepler looking for Exoplanets, rovers on Mars sniffing the air, but NASA lacks the primary directive and focus. Find life outside our own planet. We now have tantalizing evidence and methods to focus this search. In the past we had no idea where to look or ways to do it, now we do. In the recent past serious talk of finding life outside our planet would have been ridiculed, not so today.

Right here on our own solar system we have two moons we should explore and get direct observations from the surface, and the oceans beneath. We also know there are planets with atmospheres outside our own solar system, planets in the habitable zone that can harbor life. Putting aside the fact we now have a much better idea where to focus the search for not just life, but for intelligent technological life with programs like SETI. Finding even microbes alone would be something that could change our perception of the universe and our place in it.

Here is a good Video about the topic.

If the search for life was a priority the stuff of science fiction could become science fact. We could know that our planet is not alone, we are not alone. A fundamental goal such as this is every bit as, and actually more important than putting footprints on Mars. Putting men on to the planets is a noble goal, but this is not the 1960s, Getting to Mars is an order of magnitude harder and more dangerous than going to the Moon. We need to go there, eventually will go there. But we could learn so much more and make more progress towards the goal of improving our knowledge of the universe by keeping man on Earth…at least for now.

One thought on “Tough Choice, Man to Mars or Robots to the Universe”