Nearest Quasar Is Powered by a Double Black Hole 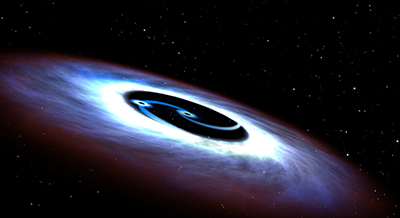 (NASA) – Astronomers using NASA’s Hubble Space Telescope have found that Markarian 231 (Mrk 231), the nearest galaxy to Earth that hosts a quasar, is powered by two central black holes furiously whirling about each other.

The finding suggests that quasars — the brilliant cores of active galaxies — may commonly host two central supermassive black holes that fall into orbit about one another as a result of the merger between two galaxies. Like a pair of whirling skaters, the black-hole duo generates tremendous amounts of energy that makes the core of the host galaxy outshine the glow of the galaxy’s population of billions of stars, which scientists then identify as quasars.

Scientists looked at Hubble archival observations of ultraviolet radiation emitted from the center of Mrk 231 to discover what they describe as “extreme and surprising properties.”

If only one black hole were present in the center of the quasar, the whole accretion disk made of surrounding hot gas would glow in ultraviolet rays. Instead, the ultraviolet glow of the dusty disk abruptly drops off towards the center. This provides observational evidence that the disk has a big donut hole encircling the central black hole. The best explanation for the observational data, based on dynamical models, is that the center of the disk is carved out by the action of two black holes orbiting each other. The second, smaller black hole orbits in the inner edge of the accretion disk, and has its own mini-disk with an ultraviolet glow.

“We are extremely excited about this finding because it not only shows the existence of a close binary black hole in Mrk 231, but also paves a new way to systematically search binary black holes via the nature of their ultraviolet light emission,” said Youjun Lu of the National Astronomical Observatories of China, Chinese Academy of Sciences. 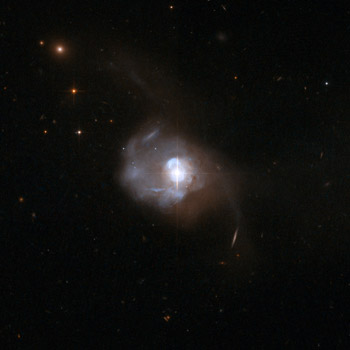 This Hubble Space Telescope image reveals a bright starlike glow in the center of the interacting galaxy Markarian 231, the nearest quasar to Earth. Located 581 million light-years away, we are seeing the galaxy as it looked before multicelled life first appeared on Earth. Quasars are powered by a central black hole that heats the gas around it to unleash tremendous amounts of energy. Hubble spectroscopic observations infer the presence of two supermassive black holes whirling around each other. Because such a dynamic duo is found in the nearest quasar, it would imply that many quasars host binary-black-hole systems. It would be a natural result of a galaxy merger.
Credit: NASA, ESA, the Hubble Heritage Team (STScI/AURA)-ESA/Hubble Collaboration, and A. Evans (University of Virginia, Charlottesville/NRAO/Stony Brook University)

“The structure of our universe, such as those giant galaxies and clusters of galaxies, grows by merging smaller systems into larger ones, and binary black holes are natural consequences of these mergers of galaxies,” added co-investigator Xinyu Dai of the University of Oklahoma.

The central black hole is estimated to be 150 million times the mass of our sun, and the companion weighs in at 4 million solar masses. The dynamic duo completes an orbit around each other every 1.2 years.

The lower-mass black hole is the remnant of a smaller galaxy that merged with Mrk 231. Evidence of a recent merger comes from the host galaxy’s asymmetry, and the long tidal tails of young blue stars.

The result of the merger has been to make Mrk 231 an energetic starburst galaxy with a star-formation rate 100 times greater than that of our Milky Way galaxy. The infalling gas fuels the black hole “engine,” triggering outflows and gas turbulence that incites a firestorm of star birth.

The binary black holes are predicted to spiral together and collide within a few hundred thousand years.