Visualization of the Protoplanetary Disk Around HL Tau 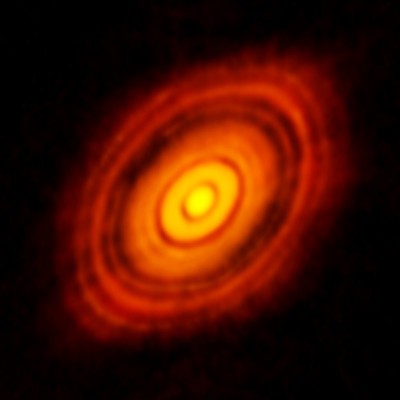 Image of the protoplanetary disk around HL Tau taken by ALMA.

(Planetary Habitability Laboratory @ UPR Arecibo) – Here we show a test of a simple code to analyze and visualize the dust structure of protoplanetary disks. The impressive image of HL Tau taken by ALMA was used for this test. This is not a scientifically calibrated image and we will have to wait to early 2015 for a scientific product. The code averages the radial brightness from the center of the star to get an average radial profile of the disk. The anomaly of this profile, with respect to an a priori gaussian model, is created to compare the relative density of the dust regions. How this relative density relates to the actual density of dust in the disk is another problem. This analysis was done as part of project on interpretations and visualizations of protoplanetary disks 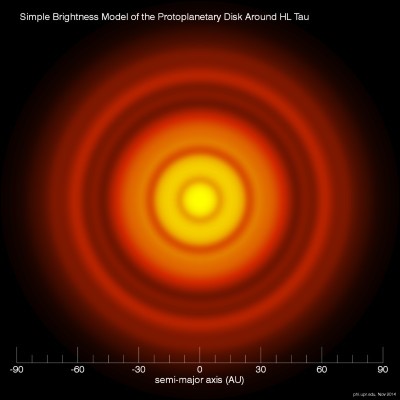 Simple brightness model of the protoplanetary disk around HL Tau derived from the average radial profile. It ignores that some of the dust regions from Figure 1 also show interesting gaps within them. The image is similar to a top view. For reference, the orbit of Neptune is at 30 AU. The size scale is approximate.