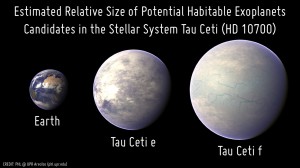 An international group of scientist led by Mikko Toumi, from the University of Hertfordshire, announced the potential discovery of five planets around the nearby star Tau Ceti (aka HD 10700 or Gliese 71). This is the 19th closest stellar system to Earth at 12 light years away. After Alpha Centauri A and B it is the next closest Sun-like star and historically of astrobiological interest, including SETI. Out of the five possible planets, the two farthest away, Tau Ceti e and f, are potentially habitable.
Tau Ceti e and f have minimum masses of 4.3 and 6.6 Earth masses, respectively. They are both superterrans (aka super-Earths) orbiting within the habitable zone of their parent star. There is no information about their size so it is not possible to tell if they are rocky, water, or even gas worlds. However, if we assume that they are composed of a water-rock mix, their radius might be closer to 1.8 and 2.3 Earth radii, respectively. 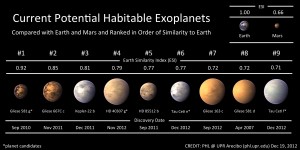