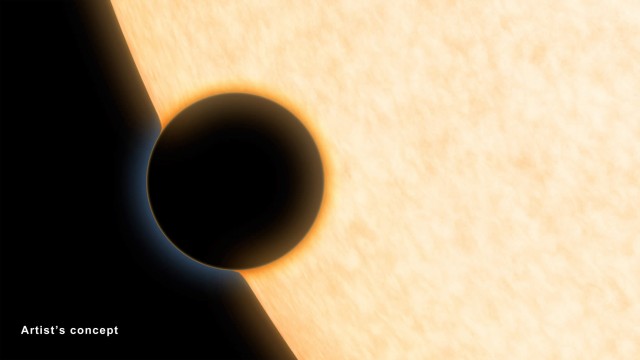 Seeing Starlight Through a Planet’s Rim

A Neptune-size planet with a clear atmosphere is shown crossing in front of its star in this artist’s depiction. Such crossings, or transits, are observed by telescopes like NASA’s Hubble and Spitzer to glean information about planets’ atmospheres. As starlight passes through a planet’s atmosphere, atoms and molecules absorb light at certain wavelengths, blocking it from the telescope’s view. The more light a planet blocks, the larger the planet appears. By analyzing the amount of light blocked by the planet at different wavelengths, researchers can determine which molecules make up the atmosphere.
The problem with this technique is that sometimes planets have thick clouds that block any light from coming through, hiding the signature of the molecules in the atmosphere. This is particularly true of the handful of Neptune-size and super-Earth planets examined to date, all of which appear to be cloudy.

As a result, astronomers were elated to find clear skies on a Neptune-size planet called HAT-P-11b, as illustrated here. Without clouds to block their view, they were able to identify water vapor molecules in the planet’s atmosphere. The blue rim of the planet in this image is due to scattered light, while the orange rim on the part of the planet in front of the star indicates the region where water vapor was detected.
Image credit: NASA/JPL-Caltech