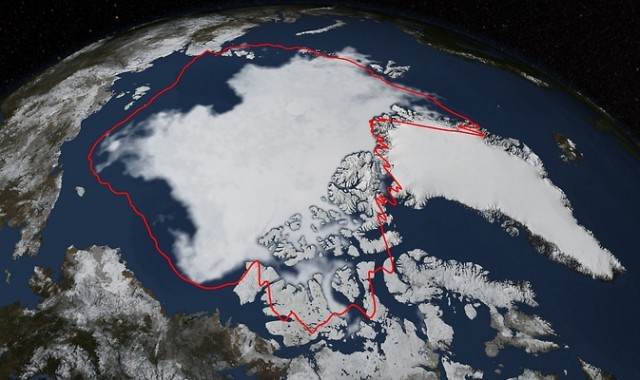 As if we needed more bad news about global warming, data from the National Snow and Ice Data Center (NSIDC) at the University of Colorado, Boulder.Arctic shows sea ice coverage continued its below-average trend this year as the ice declined to its annual minimum on Sept. 17,2014. This year’s minimum extent is similar to last year’s and below the 1981-2010 average of 2.40 million square miles (6.22 million square km).

“Arctic sea ice coverage in 2014 is the sixth lowest recorded since 1978. The summer started off relatively cool, and lacked the big storms or persistent winds that can break up ice and increase melting,” said Walter Meier, a research scientist at NASA’s Goddard Space Flight Center in Greenbelt, Maryland.

Sea ice acts as an air conditioner for the planet, reflecting energy from the sun. On Sept. 17, the Arctic sea ice reached its minimum extent for 2014. At 1.94 million square miles (5.02 million square kilometers), it’s the sixth lowest extent of the satellite record.  This year’s minimum remains in line with a downward trend; the Arctic Ocean is losing about 13 percent of its sea ice per decade.

“Even with a relatively cool year, the ice is so much thinner than it used to be,” Meier said. “It’s more susceptible to melting.” . A finger of open water stretched north of Siberia in the Laptev Sea, reaching beyond 85 degrees north, which is the farthest north open ocean has reached since the late 1970s, according to Meier.

Animation of daily Arctic sea ice extent from March 21 to Sept. 17 – when the ice appeared to reach it’s minimum extent for the year. It’s the sixth lowest minimum sea ice extent in the satellite era. The data was provided by the Japan Aerospace Exploration Agency.

While summer sea ice has covered more of the Arctic in the last two years than in 2012’s record low summer, this is not an indication that the Arctic is returning to average conditions, Meier said. This year’s minimum extent remains in line with a downward trend.