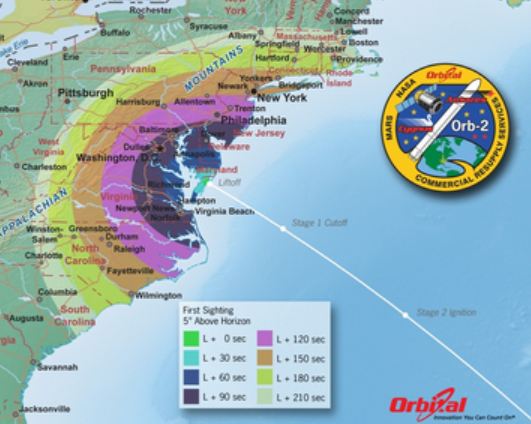 Update Saturday 7/12/13 – Private spaceflight company Orbital Sciences  postponed the launch of its second unmanned mission to the International Space Station due to weather at Wallops Island. Now the mission is now set to launch Sunday July 13  at 12:52 p.m. EDT (1652 GMT)

If you live in the northeastern United States take a walk outside around lunch time Saturday and you may be able to see a launch from Wallops Va. The launch of an Antares rocket for the Orb-2 Commercial Resupply Services mission to the International Space Station has been rescheduled for Saturday, July 12 at 1:14 p.m. EDT. Due to severe thunderstorms in the Wallops area the night of Tuesday, July 8, the roll out of the Antares rocket was delayed resulting in a compression of the operational schedule leading to the launch. The launch team determined the best course of action would be to postpone the launch one day to allow for normal launch operations processing. The Cygnus will still arrive at the ISS on July 15 with berthing scheduled at approximately 7:24 a.m. EDT.

The Cygnus will be filled with more than 3,000 pounds of supplies for the station, including science experiments to expand the research capability of the Expedition 40 crew members aboard the orbiting laboratory, crew provisions, spare parts and experiment hardware.

Among the research investigations headed to the space station aboard Orbital-2 are a flock of nanosatellites that are designed to take images of Earth, developed by Planet Labs of San Francisco; and a satellite-related investigation called TechEdSat-4 built by NASA’s Ames Research Center in California, which aims to develop technology that will eventually enable small samples to be returned to Earth from the space station. In addition, a host of student experiments are being flown in association with the Student Spaceflight Experiment Program, an initiative of the National Center for Earth and Space Science Education and NanoRacks.

This and future commercial cargo resupply flights will ensure a robust national capability to deliver critical science research to orbit, significantly increasing NASA’s ability to conduct new science investigations to the only laboratory in microgravity.