Nearby Super-Earth with the Right Temperature but Extreme Seasons 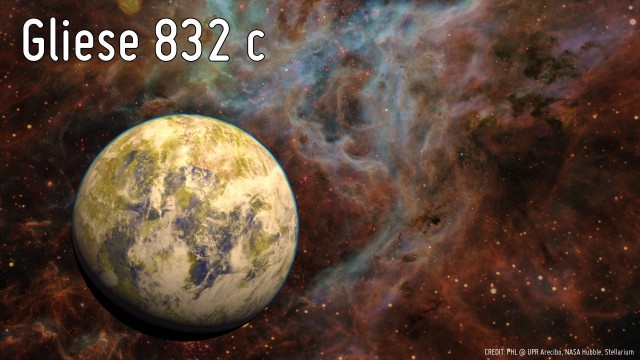 Gliese 832 c is the nearest best habitable world candidate so far
(PHL @ UPR Arecibo) – An international team of astronomers, led by Robert A. Wittenmyer from UNSW Australia, report the discovery of a new potentially habitable Super-Earth around the nearby red-dwarf star Gliese 832, sixteen light years away. This star is already known to harbour a cold Jupiter-like planet, Gliese 832 b, discovered on 2009. The new planet, Gliese 832 c, was added to the Habitable Exoplanets Catalog along with a total of 23 objects of interest. The number of planets in the catalog has almost doubled this year alone.
Gliese 832 c has an orbital period of 36 days and a mass at least five times that of Earth’s (≥ 5.4 Earth masses). It receives about the same average energy as Earth does from the Sun. The planet might have Earth-like temperatures, albeit with large seasonal shifts, given a similar terrestrial atmosphere. A denser atmosphere, something expected for Super-Earths, could easily make this planet too hot for life and a “Super-Venus” instead.
The Earth Similarity Index (ESI) of Gliese 832 c (ESI = 0.81) is comparable to Gliese 667C c (ESI = 0.84) and Kepler-62 e (ESI = 0.83). This makes Gliese 832 c one of the top three most Earth-like planets according to the ESI (i.e. with respect to Earth’s stellar flux and mass) and the closest one to Earth of all three, a prime object for follow-up observations. However, other unknowns such as the bulk composition and atmosphere of the planet could make this world quite different to Earth and non-habitable.

So far, the two planets of Gliese 832 are a scaled-down version of our own Solar System, with an inner potentially Earth-like planet and an outer Jupiter-like giant planet. The giant planet may well played a similar dynamical role in the Gliese 832 system to that played by Jupiter in our Solar System. It will be interesting to know if any additional objects in the Gliese 832 system (e.g. planets and dust) follow this familiar Solar System configuration, but this architecture remains rare among the known exoplanet systems. 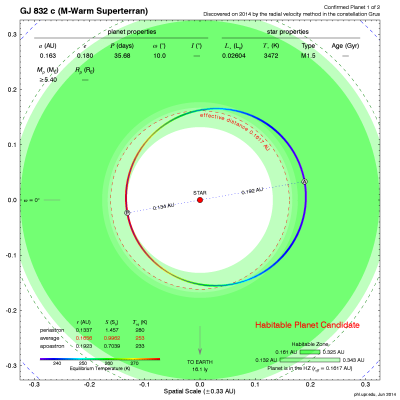 Orbital analysis of Gliese 832 c, a potentially habitable world around the nearby red-dwarf star Gliese 832. Gliese 832 c orbits near the inner edge of the conservative habitable zone. Its average equilibrium temperature (253 K) is similar to Earth (255 K) but with large shifts (up to 25K) due to its high eccentricity (assuming a similar 0.3 albedo). Credit: PHL @ UPR Arecibo. 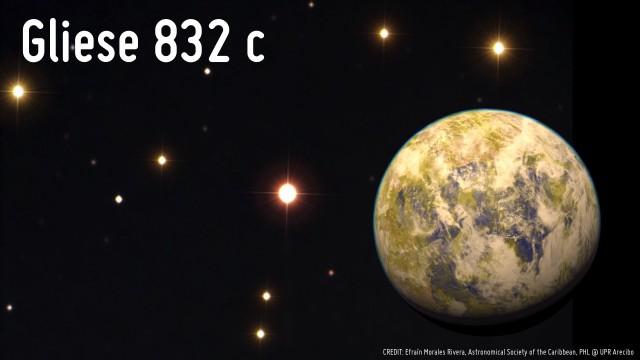