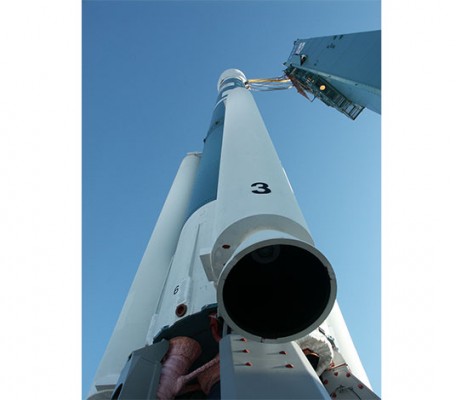 Update July 1, The launch was delayed 24 hours due to an issue with the rocket. A 24 hour recycle time is needed and another attempt will be made on July 2nd.

NASA is attempting to launch a second Orbiting Carbon Observatory (OCO)-2 after the first failed to reach orbit in 2009. Launch is scheduled for July 1, 2014 at 2:56 am eastern time.

The original OCO was launched from Vandenberg Air Force Base on February 24, 2009. A launch vehicle anomaly occurred which prevented the OCO spacecraft from reaching injection orbit. The spacecraft was destroyed as it re-entered the atmosphere. .  The new OCO-2 is based on the original OCO mission that was developed under the NASA Earth System Science Pathfinder (ESSP) Program Office and launched  The Orbiting Carbon Observatory-2 (OCO-2) mission was authorized to enter a tailored formulation phase on March 8, 2010.

The Orbiting Carbon Observatory-2 (OCO-2) is comprised of a single instrument that flies on a dedicated spacecraft. The instrument, consisting of three high resolution grating spectrometers, will acquire precise measurements of atmospheric CO2. The OCO-2 spacecraft bus, developed by Orbital Sciences Corporation, is primarily based on the LeoStar-2 bus design and architecture used for the OCO, Solar Radiation and Climate Experiment (SORCE), and Galaxy Explorer (GALEX) missions. The Observatory will be launched from the Vandenberg Air Force Base in California on a dedicated Delta II rocket.The Observatory will acquire data in three different measurement modes. In Nadir Mode, the instrument views the ground directly below the spacecraft. In Glint Mode, the instrument tracks near the location where sunlight is directly reflected on the Earth’s surface. Glint Mode enhances the instrument’s ability to acquire highly accurate measurements, particularly over the ocean. In Target Mode, the instrument views a specified surface target continuously as the satellite passes overhead. Target Mode provides the capability to collect a large number of measurements over sites where ground based and airborne instruments also measure atmospheric CO2. The OCO-2 Science Team will compare Target Mode measurements with those acquired by ground-based and airborne instruments to validate OCO-2 mission data. The Observatory has a planned operational life of 2 years.