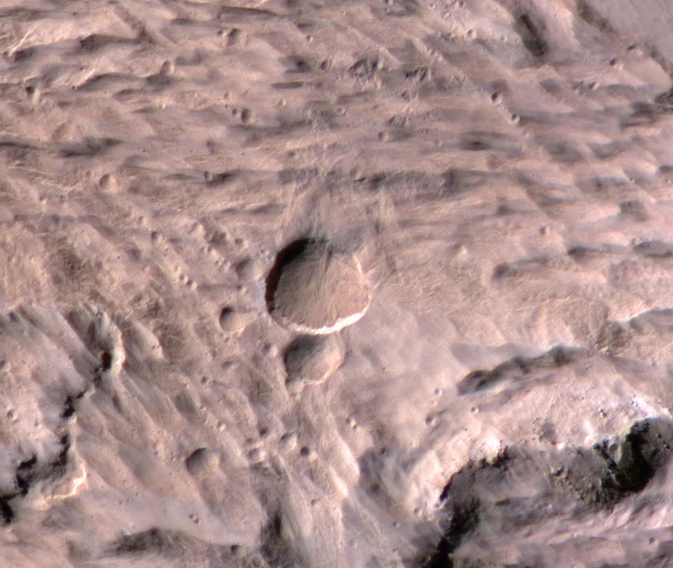 The new Mars crater spans half the length of a football field in this photo from the Mars Reconnaissance Orbiter’s sharpest-sighted camera, the High Resolution Imaging Science Experiment.
Image Credit: NASA/JPL-Caltech/University of Arizona

Researchers have discovered on the Red Planet the largest fresh meteor-impact crater ever firmly documented with before-and-after images. The images were captured by NASA’s Mars Reconnaissance Orbiter (MRO).

The crater spans half the length of a football field and first appeared in March 2012. The impact that created it likely was preceded by an explosion in the Martian sky caused by intense friction between an incoming asteroid and the planet’s atmosphere. This series of events can be likened to the meteor blast that shattered windows in Chelyabinsk, Russia, last year. The air burst and ground impact darkened an area of the Martian surface about 5 miles (8 kilometers) across.

The darkened spot appears in images taken by the orbiter’s weather-monitoring camera, the Mars Color Imager (MARCI). Images of the site from MARCI and from the two telescopic cameras on MRO are at:

Since the orbiter began its systematic observation of Mars in 2006, scientist Bruce Cantor has examined MARCI’s daily global coverage, looking for evidence of dust storms and other observable weather events in the images. Cantor is this camera’s deputy principal investigator at Malin Space Science Systems, the San Diego company that built and operates MARCI and the orbiter’s telescopic Context Camera (CTX). Through his careful review of the images, he helps operators of NASA’s solar-powered Mars rover, Opportunity, plan for weather events that may diminish the rover’s energy. He also posts weekly Mars weather reports.

About two months ago, Cantor noticed an inconspicuous dark dot near the equator in one of the images.

“It wasn’t what I was looking for,” Cantor said. “I was doing my usual weather monitoring and something caught my eye. It looked usual, with rays emanating from a central spot.” Once the dark spot was verified as new, it was targeted last month by CTX and the orbiter’s sharpest-sighted camera, the High Resolution Imaging Science Experiment (HiRISE). Of the approximately 400 fresh crater-causing impacts on Mars that have been documented with before-and-after images, this is the only one discovered using a MARCI image, rather than an image from a higher-resolution camera.

CTX has imaged nearly the entire surface of Mars at least once during the orbiter’s seven-plus years of observations. It had photographed the site of this newly-discovered crater in January 2012, prior to the impact. Two craters appear in the April 2014 CTX image that were not present in the earlier one, confirming  the dark spot revealed by MARCI is related to a new impact crater.

HiRISE reveals more than a dozen smaller craters near the two larger ones seen in the CTX image, possibly created by chunks of the exploding asteroid or secondary impacts of material ejected from the main craters during impact. It also reveals many landslides that darkened slopes in the 5-mile surrounding area. A second HiRISE image in May 2014 added three-dimensional information.

“The biggest crater is unusual, quite shallow compared to other fresh craters we have observed,” said HiRISE Principal Investigator Alfred McEwen of the University of Arizona, Tucson.

McEwen estimates  the impact object measured about 10 to 18 feet (3 to 5 meters) long, which is less than a third the estimated length of the asteroid that hit Earth’s atmosphere near Chelyabinsk. Because Mars has much less atmosphere than Earth, space rocks of comparable size are more likely to penetrate to the surface of Mars and cause larger craters.

“Studies of fresh impact craters on Mars yield valuable information about impact rates and about subsurface material exposed by the excavations,” said Leslie Tamppari, deputy project scientist for the Mars Reconnaissance Orbiter mission at NASA’s Jet Propulsion Laboratory (JPL) in Pasadena, California. “The combination of HiRISE and CTX has found and examined many of them, and now MARCI’s daily coverage has given great precision about when a significant impact occurred.”