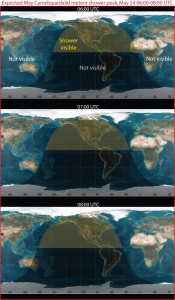 (NASA) Step outside and take a look at the skies on the evening of May 23 into the early morning of May 24. Scientists are anticipating a new meteor shower, the May Camelopardalids. No one has seen it before, but the shower could put on a show that would rival the prolific Perseid meteor shower in August. The Camelopardalids shower would be dust resulting from a periodic comet, 209P/LINEAR.

Some forecasters have predicted a meteor storm of  200 to 1000 meteors per hour  “We have no idea what the comet was doing in the 1800s. The parent comet doesn’t appear to be very active now, so there could be a great show, or there could be little activity.” said Bill Cooke, lead for NASA’s Meteoroid Environment Office

Comet 209P/LINEAR was discovered in February 2004 by the Lincoln Near-Earth Asteroid Research project, a cooperative effort of NASA, the Massachusetts Institute of Technology Lincoln Laboratory, and the US Air Force. It is a relatively dim comet that dips inside the orbit of Earth once every five years as it loops around the sun.

Two years ago, meteor experts Esko Lyytinen of Finland and Peter Jenniskens at NASA Ames Research Center announced that Earth was due for an encounter with debris from Comet 209P/LINEAR. Streams of dust ejected by the comet mainly back in the 1800s would cross Earth’s orbit on May 24, 2014. The result, they said, could be a significant meteor outburst.

“We expect these meteors to radiate from a point in Camelopardalis, also known as ‘the giraffe,’ a faint constellation near the North Star,” Cooke said. “It’s a great opportunity to see a new meteor shower — an opportunity I want to see with my own eyes.”